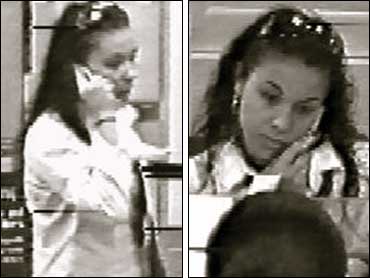 The college student dubbed the "cell phone bandit" was sentenced to 12 years in prison Friday for her brazen heists in Northern Virginia while chatting on the phone with her boyfriend.

Candice R. Martinez, 20, told the judge she was still unsure what prompted the crime spree.

"It happened in a matter of weeks, but it seemed like seconds," she said.

Martinez, wearing a black-and-white prison uniform, tearfully apologized to the bank tellers — two of whom were in court.

"My whole life is ruined," she said.

Martinez gained notoriety after one of the four robberies was captured on a surveillance video. In a tape broadcast around the world, she was seen calmly talking on her cell phone while a nervous teller complied with typed instructions demanding cash.

U.S. District Judge Gerald Bruce Lee sentenced her to five years for conspiracy to commit bank robbery and seven years on a firearms charge. In one of the robberies, Martinez pulled a .38 caliber revolver.

A week earlier, her boyfriend was sentenced to 12 years in prison for helping plan the robberies. Dave C. Williams, 19, of Fairfax drove the getaway car and stayed on the phone with Martinez while she was in the banks.

The four robberies, at Wachovia Bank branches in the Virginia suburbs of Washington, D.C., netted the couple $48,620 during October and November. Williams had worked for Wachovia in the past.

His client is young and "certainly had a rough life," Davis said.

"She's been abused just about any way you can think of. And through all that she's really come a long way. But she's really got some demons to exorcise and they really got the best of her," Davis said. "She had a lapse in judgment and she's gonna pay dearly for it."

Martinez learned her fate one week after her boyfriend was sentenced to 12 years in prison for his role in the robberies.

Williams, also 19, pleaded guilty to the same charges as Martinez on Dec. 1.

Martinez, who grew up in Santa Fe, N.M., and Williams were students at Northern Virginia Community College when they began their robberies.

Investigators said they spent the money on clothing, a plasma screen television, a bedroom set and a 1997 Acura Integra.