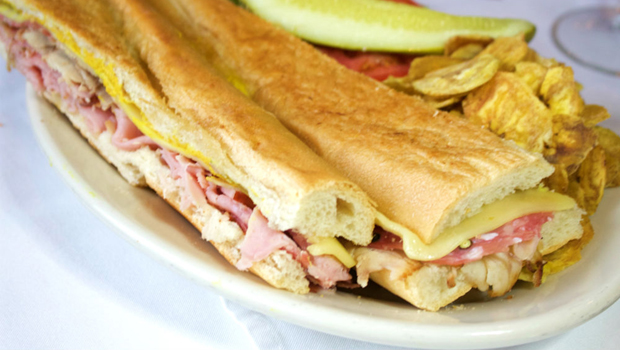 Susan Spencer of "48 Hours" travels to Tampa, Fla., for a treat on the menu:

Just two words may explain why Tampa's venerable Columbia Restaurant has lasted more than a century: Cuban Sandwich ... each built to exact specifications (Salami, four slices -- not 3, not 5) made from an age-old family recipe. Not a lot of room for creativity.

Richard Gonzmart and his daughter, Andrea Gonzmart William, are the fifth and sixth generations to own and run the Columbia. "We're the oldest Hispanic restaurant in the United States," he said.

Andrea outlined the Cuban sandwich's ingredients: "Here you have our whole ham. Over here, we have our pork, and then we have our salami with the black peppercorns. Swiss cheese, dill pickles, and then yellow mustard.

"What about, you know, mayonnaise, lettuce, tomatoes?" asked Spencer.

"The Cuban sandwich at the Columbia restaurant should be nine inches long, period, end of story," said Andrea.

It's served hot after being assembled in a VERY precise order.

"You first start with the ham," said Richard. "Then you go to the pork. Then there's salami. Then the cheese, then the pickles, and the mustard on the top."

"What difference does it make?" Spencer asked.

"Because when you bite it, the palate, the mustard hits the top of your mouth," said Richard. "It tastes totally different. If you put the mustard on the bottom, really you can't tell."

They serve up to 600 Cuban sandwiches a day.

"This is a heavy sandwich," said Spender.

"It's a very heavy sandwich," said Andrea. "But I think it's anything like a burger. You go and you know you wanna eat it. And you indulge."

"Do you consider this a regional food?"

"It's a Tampa original," said Richard.

Not so fast: Apparently the good folks in Miami like to claim the Cuban Sandwich as their own.

"I love when Miami says they have the real Cuban sandwich," exclaimed Richard. Impossible, he says, given what Miami leaves out. "They don't put salami [in it]," he said. "That's the big argument."

With or without salami, the Cuban finds its place on roughly three times as many restaurant menus today as it did a decade ago -- a regional delight that could be coming soon to a café near you.