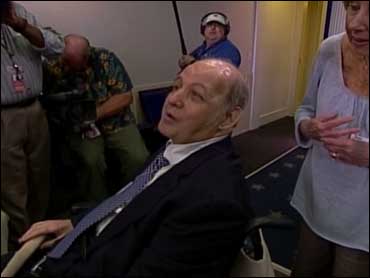 Half a century ago a beekeeper's son from New Zealand and a Nepalese guide made the first successful ascent of Mount Everest, the world's tallest peak.

The May 29, 1953, anniversary of the climb to the top of the 29,035-foot peak was being marked beginning Tuesday with an exhibition at the National Geographic Society's Explorers Hall.

Edmund Hillary, 83, plans to visit the exhibit later in the year. His companion on the climb, Tenzing Norgay, died in 1986.

The exhibition shows that since the Hillary expedition Everest has become a popular destination.

More than 1,600 climbers have made the ascent in the past half-century. Earlier this month, 14 disabled Americans, five of them in wheelchairs, reached a base camp at 17,160 feet.

Brent Bishop, son of Barry Bishop, who was part of the first U.S. team to make it to the top in 1963, has taken up the job of removing the trash that climbers have left behind over the years.

"He makes a trip whenever he can get the financing," said Susan E.S. Norton, director of exhibits at Explorers Hall.

Norgay's people, the 70,000 Sherpas, have grown prosperous in the tourist trade. The National Geographic Society estimates that Sherpas who work in tourism have an average income of $7,000 a year, about five times the Nepal's national level.

More than 300 lodges and hotels, most run by the Sherpas, serve climbers and other tourists in the region. There is an airstrip, but no roads.

The Washington exhibit is a collaboration between the National Geographic and the Auckland War Memorial Museum in New Zealand's capital, where it was on view until last month.

Among the curiosities is the ice ax Hillary used to carve steps for the last few feet of the climb. Visitors can try crossing a crevasse on an aluminum ladder with a back pack weighing more than 50 pounds - the crevasse is actually just about six inches deep.

They can also sit on the benches of a schoolhouse, modeled after the one Hillary gave the Sherpas, to watch a 20-minute video on his career.

The exhibit will be on view until Sept. 1. Admission is free.