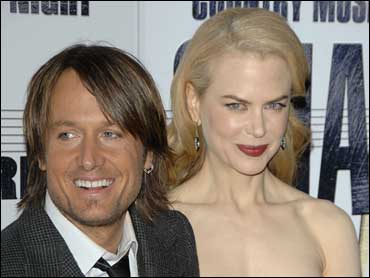 When it comes to naming babies in Hollywood, it appears the more famous the parent, the more unique the child's name.

The Jolie-Pitts have Shiloh, Tom Cruise and Katie Holmes' tot is named Suri, and then there's Gwyneth Paltrow's Apple and the Beckham's Brooklyn.

This week, Nicole Kidman and Keith Urban named their new daughter Sunday Rose, but reviews have been mixed.

Before Matthew McConaughey and model girlfriend Camila Alves' son arrived on Tuesday, it was rumored their first-born might be named Bud - after McConaughey's favorite beer.

But, as the actor wrote in his blog yesterday, the couple opted for Levi which is another name used for Matthew in the New Testament.

"One of the big issues with names is picking a name that will be comfortable for your child and celebrities pick names, I think, that please themselves," Bruce Lansky, author of "Five-Star Baby Name Advsior" told Early Show substitute co-anchor Lara Spencer. "You mentioned Sunday Rose? Sunday Rose was born on a Monday."

Lansky said that in Africa, parents often name their children for the day of the month or day of the week on which they were born. Originally, he thought the girl was named for a rose variety, but it turns out Kidman's parents were inspired by a famous Australian woman.

"There was a lady named Sunday Reed who was a prominent patron of the arts in Victoria," Dr. Antony Kidman told the Sunday Telegraph. "I have read a bit about Sunday Reed and her husband John - she was a key mover and shaker in the arts around the beginning of the century. The name Sunday struck me as being a nice name for a woman, so my wife and I mentioned it."

Lansky doesn't believe the name will catch on in America.

"If you ask somebody, they will say, what were they thinking?" said Lansky. "You must be kidding. What a silly name. And that's not a name, I think, that will make it."

"It's a brand of jeans, but it's associated with building the West. It's associated with the Gold Rush. It's very cool. It is very masculine. I would like him riding shotgun on a really fast horse behind me covering my back," he joked.

Lansky said that the name Suri is not to be confused with the fringed buggy sung about in the musical "Oklahoma" (it's spelled differently, too.) But the meaning of the name Suri in India is not flattering.

"Suri is a name that in a very obscure dialect in India which means beaked nose or hooked nose. It's not a cool name," said Lansky.

He said that it's best to keep names simple.