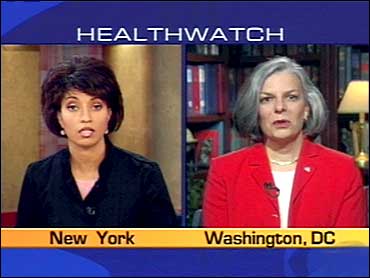 The Centers for Disease Control and Prevention testified Monday before a congressional committee that it is fully mobilized to deal with Severe Acute Respiratory Syndrom or SARS, which had killed at least 100 worldwide.

Dr. Julie Gerberding, Centers for Disease Control's Director, visited The Early Show Tuesday and explained that the CDC, World Health Organization (WHO) and other researchers are working feverishly to map the genome of the microbe, which has been linked to a new form of coronavirus usually found in animals. She said there's hope this could lead to development of a vaccine.

The most important thing the medical community can do now, she says, is to identify people who had SARS and to isolate them.

Symptoms include high fever, aches, dry cough and shortness of breath. No cure has been found.

In order to catch as many cases as possible, the CDC has printed cards to be handed out to airline passengers arriving in the U.S. from areas where SARS has appeared. The card is printed in several languages and it advises people to monitor their health for at least 10 days. If they show any of the symptoms it recommends seeing a doctor.

Gerberding says there were 2031 cases internationally and the death toll worldwide had risen to about 100. Plus 148 suspected cases domestically in 30 states. No one in this country has died yet of SARS.

Gerberding says she doesn't want to alarm people, but the disease has the potential to spread very quickly and to spread globally. In order to protect against it, people should stay informed, she says, and understand where the epidemic is.

China disclosed Monday that a deadly respiratory illness had struck in more of its provinces than previously reported, while experts in the south looked into whether the disease came from animals on farms or in the wild.

In nearby Hong Kong, officials said they were preparing for a worst-case scenario of 3,000 cases of severe acute respiratory syndrome, or SARS, amid fears its health system could be stretched beyond its limits. There are 700 cases there and officials say its hospitals can currently handle 1,500 cases.

Also Monday, the Beijing office of the Geneva-based International Labor Organization was sealed, and an employee of the diplomatic office building said it was disinfected after a Finnish official of the agency fell ill with severe acute respiratory syndrome, or SARS, in Beijing. The official died Sunday.

Chinese officials had reported 43 SARS deaths in the southern province of Guangdong, where experts suspect the illness originated, with fatalities also coming in Beijing and the Guangxi region.

On Monday, Chinese state television reported that there were also one SARS death each in the provinces of Shanxi in the north, Sichuan in the west and Hunan in central China — the first fatalities in those areas and an indication the disease was more widespread geographically than previously acknowledged.

The new disclosures come after mounting criticism at home and abroad that China's communist government was too slow to release information about SARS.

In New Delhi, World Health Organization director-general Gro Harlem Brundt said Sunday that "it would have been much better if the Chinese government had been more open in the early stages."

Meanwhile, World Health Organization experts who are searching Guangdong for clues to how SARS spreads and why it kills were looking into whether it might have come from animals.

The team hasn't yet found clear evidence to support that widely discussed possibility, but its members met with local animal-health officials and discussed both farm animals and wildlife, including pigs, ducks, bats, rodents, chickens and other birds, said team leader, Dr. Robert Breiman.

Experts have linked SARS to a new form of coronavirus, other forms of which usually are found in animals.

That link "may suggest that it originates from animals," Breiman said. However, he said, "the discussions today were inconclusive, so we really don't have clues."