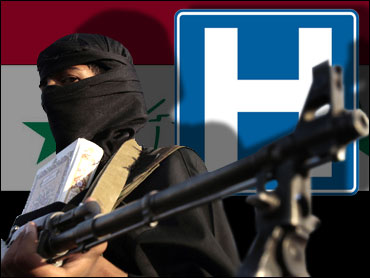 An assembly line of rotting corpses lined up for burial at Sandy Desert Cemetery is what civil war in Iraq looks like close up.

The bodies are only a fraction of the unidentified bodies sent from Baghdad every few days for mass burial in the southern Shiite city of Kerbala, CBS News chief foreign correspondent Lara Logan reports.

They come from the main morgue that's overflowing, relatives too terrified to claim their dead because most are from Iraq's Sunni minority, murdered by Shiite death squads.

And the morgue itself is believed to be controlled by the same Shiite militia blamed for many of the killings: the Mahdi Army, founded and led by anti-American cleric Moqtada al-Sadr.

The takeover began after the last election in December when Sadr's political faction was given control of the Ministry of Health. The U.S. military has documented how Sadr's Mahdi Army has turned morgues and hospitals into places where death squads operate freely.

Reporter's Notebook
Lara Logan writes on how she found the story of the hospital death squads.

The chilling details are spelled out in an intelligence report seen by CBS News. Among some of the details of the report are:
View CBS News In
CBS News App Open
Chrome Safari Continue
Be the first to know
Get browser notifications for breaking news, live events, and exclusive reporting.