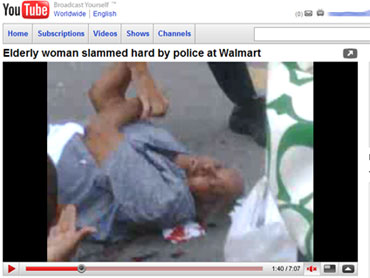 (YouTube)
WHITEHALL, Ohio (AP) An Ohio police department says it has received scores of calls from around the country complaining about a YouTube video showing an officer taking an 84-year-old woman to the ground.

Police Chief Richard Zitzke in the Columbus suburb of Whitehall says the officer did what she had to do when the woman was seen holding a steak knife in a Walmart parking lot on Aug. 1.

Police say the woman has Alzheimer's.

Zitzke says police have tried to explain their side to callers from as far as Texas and California.

Some have called the white officer a racist. The woman was black.

But Stan Brown of Columbus, the bystander who shot the video with his phone, says he believes no was racism involved. The 29-year-old black man says he now feels badly for the officer.