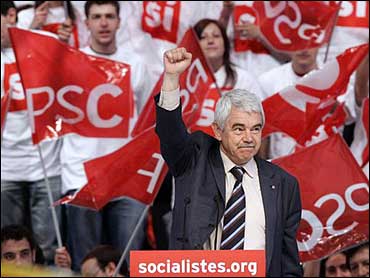 The wealthy semiautonomous Catalonia region gained sweeping new powers to run its affairs Sunday, as voters overwhelmingly approved a blueprint that some fear could leave Spain's government cash-strapped and powerless.

Nearly three out of four voters said 'yes' to the plan, known here as the statute, in a binding referendum that culminates a process which dominated debate in Spain for more than two years.

"The citizens have decided to open a new era with more strength, more acknowledgment of the Catalan national reality, more areas of jurisdiction, more resources and more capacity to intervene in Spanish and European policy," said Jose Montilla, the No. 2 official in the Catalan branch of the ruling Socialist Party, and also the Spanish industry minister.

At stake in the voting in this region, which considers itself a nation within a nation, were a much bigger slice of tax revenues collected in Catalonia, a say in the appointment of judges and prosecutors to courts run from Madrid and, critically, an indirect proclamation of Catalonia as a "nation."

The new charter also gives the Mediterranean region control over a variety of areas such as infrastructure, including train services and highways, and work permits for immigrants in the region.

The referendum is binding and the results are final because the blueprint has already been passed by the Spanish parliament.

With 98 percent of the votes counted, 74 percent of voters approved the charter and just under 21 percent said no, the Catalan government said. Turnout was about 49 percent.

Conservatives opposed the new charter saying it effectively nudges Catalonia away from the rest of Spain, unfairly singles it out for special perks and will encourage other semiautonomous Spanish regions to seek the same.

And this, they say, poses the risk of leaving the Spanish government with no money or power to run the country, rendering it meaningless.

Josep Pique, leader of the Catalan branch of the opposition Popular Party, said it was a bad day for Spain. "Today we suffered an extraordinary setback," he said.

Asun Busquets, a 40-year-old secretary in Barcelona, said she voted 'yes' to the new charter because Catalonia deserves more powers to compensate for its economic might — 20 percent of the Spanish economy. "It is a way of achieving equality with the rest of Spain," she said.

But Gabino Escribano, a 38-year-old industrial technician who is from the Valencia region further south, said he had voted against the charter because he thinks it was not good for Catalonia or Spain in general.

"I don't like the idea of Spain breaking up," he said. Catalan politicians, he said "are playing with fire."

The new powers overhaul a nearly 30-year-old charter that granted Catalonia a large degree of self-rule after the death of Gen. Francisco Franco in 1975 and the end of a regime bent on concentrating power in Madrid.

Other Spanish regions, such as the Basque country, have similar deals. But the Catalans and Basques have more self rule than any other part of Spain.

Nationalists here — and the Socialist government in Madrid — say that the Catalan arrangement is outdated, especially given Catalonia's distinct culture and economic strength.

A poll published May 30 in El Mundo newspaper said 54 percent of Spaniards oppose the new charter and about the same proportion say it should be put to a national vote, not just in Catalonia.