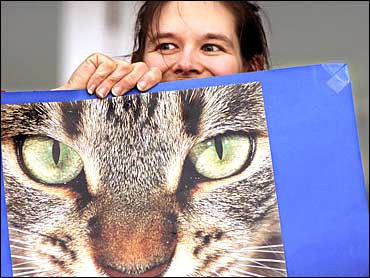 Wisconsin's governor says he doesn't want his state to be known as the place where people can legally shoot cats.

Governor Jim Doyle says "everybody is kind of laughing" at his state right now — over a proposal to legalize the killing of feral cats.

The proposal was adopted Monday at meetings of the Wisconsin Conservation Congress — a public advisory group. It classifies wild, free-roaming cats as an unprotected species that kills songbirds and other wildlife.

"I don't think Wisconsin should become known as a state where we shoot cats," said Doyle, a Democrat who neither hunts nor owns a cat.

He told reporters his office had received calls from around the country denouncing a proposal adopted Monday at meetings of the Wisconsin Conservation Congress, a public advisory group, that would classify wild, free-roaming cats as an unprotected species that kills song birds and other wildlife.

Outdoor enthusiasts approved the proposal 6,830 to 5,201 at Monday's spring hearings of the group.

The results get forwarded to the state Natural Resources Board for consideration, but any official action would have to be passed by the Legislature and signed by the governor.

Animal rights groups belittled the idea as inhumane and dangerous.

Doyle said he respects the Conservation Congress but "on this one I think everybody recognizes it's not going anywhere."

South Dakota and Minnesota both allow wild cats to be shot.

Two state senators — Scott Fitzgerald and Neil Kedzie — had promised to do everything they can to keep the plan from becoming law.

Kedzie, who chairs the Natural Resources and Transportation Committee, called the issue "a distraction from the main tasks we have at hand."

Now the measure is headed to the state Natural Resources Board. Then it would have to be passed by lawmakers and signed by the governor.

South Dakota and Minnesota both allow wild cats to be shot.

Few hunters publicly spoke in favor of the plan, first proposed by Mark Smith, a La Crosse firefighter. Smith had faced death threats over the plan.

Even Karen Hale, executive director of the Madison Audubon Society, one of the largest pro-bird groups in the country with 2,500 members, said she voted no. While the cats have reduced the population of birds in the state, she said the question was too controversial.

"The whole issue of possibly hunting them is so controversial and there has been so much misinformation that we really need a lot more discussion on this issue," Hale said. She called for another study looking at the impact of feral cats.