DON'T ASK whether Congress will repeal the "Don't Ask Don't Tell" ban on gays in the military . . . it's still far too soon to know. What we DO know is that attitudes are changing on that question, including among some of those at the highest levels of the Pentagon. Our Cover Story is reported now by Kimberly Dozier:

"Today I have approved a series of changes to the implementation of the current statute."

His words were measured, but they'll have a big impact. On Thursday, Defense Secretary Robert Gates made the biggest change since 1993 in the military's policy toward gays.

He introduced new, more stringent regulations, which will slow - or could even virtually stop - the explusion of gay servicemembers.

"I believe these changes represent an important improvement in the way the current law is put into practice," Gates said, "above all by providing a greater measure of common sense and common decency, to a process for handling what are difficult and complex issues for all involved."

It's another step on the path taken by President Obama since assuming office.

Having criticized "Don't Ask, Don't Tell" as a punishment of patriotic Americans who have stepped forward to serve their country, Mr. Obama said in his State of the Union address that he would work with Congress and the Pentagon to "to finally repeal the law that denies gay Americans the right to serve the country they love because of who they are."

It's a path that might seem straightforward, but that has historically been filled with political and social landmines.

It's another step on the path President Obama has taken since assuming office.

"I will end 'Don't ask, don't tell,' that's my commitment to you," said President Obama.

Don't ask, don't tell - the policy that's led to the discharges of more than 13,000 gay servicemembers, at times an average of one every day.

When we talked with them, they were setting up house in a small town in south Texas.

Full disclosure: I have a personal interest in Sgt Presley's story. I first met her in 2006. She helped keep me alive when our CBS News team was hit by a car bomb.

Sergeant Presley was honored for her work saving lives that day.

"The Army gave me a bronze star for my actions in that incident," she said. "And this is what they gave me for being gay."

"This" was an honorable discharge, given during her second tour in Iraq, after she reported a superior commander for suspected drug dealing . . . and someone struck back.

"I was called into my first sergeant's office," Presley recalled. "And he told me that there was allegations that I was participating in homosexual conduct and that there were pictures that had been sent to my battalion commander." 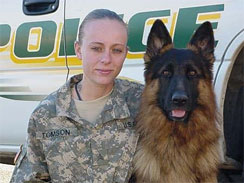 (CBS)
The pictures were of Presley and her girlfriend, Sergeant Holly Tomson (left). Sgt. Tomson was serving in another unit stateside handling bomb-sniffing dogs, a decorated soldier in her own right. She was NCO of the Year.

She was also discharged.

"I was planning on having a career in the military, 'cause I like it," said Tomson. "I love the Army."

The cause of gay servicemembers has been picking up quite a bit of support lately. The Chairman of the Joint Chiefs, Admiral Mike Mullen, made his personal views clear just a few weeks ago.

"It is my personal belief that allowing gays and lesbians to serve openly would be the right thing to do," he said. "No matter how I look at this issue, I cannot escape being troubled by the fact that we have in place a policy which forces young men and women to lie about who they are in order to defend their fellow citizens."

And there is gathering momentum in Congress, where the drive to repeal "Don't ask, don't tell" has a number of new champions, some of whom might surprise you.

"We had a saying when I was a young cadet: Lead, follow or get out of the way," said Rep. Patrick Murphy, D-Pa., the first Iraq War veteran elected to Congress.

On the House floor last October 6, Murphy said, "The 'Don't ask don't tell' policy goes against the very fabric of what makes our country the greatest country on Earth, the fact that we're all created equal."

Murphy told the House, "It has cost the American tax payer $1.3 billion dollars to throw these young American heroes out of our military, just because of their sexual orientation."

"Yeah, a lot of people ask me, you know, why is an Irish Catholic former altar boy taking a lead on this, who happens to be a Blue Bog Democrat, a fiscal conservative?" said Murphy. "And I tell them, one, for national security, the fact that we need every able body, qualified American to serve right now because our troops are fighting in Iraq and Afghanistan."

That's an argument that President Obama has found cuts both ways.

"The president has to walk a very careful line on 'Don't ask, don't tell,'" said CBS News political analyst John Dickerson. With a military under stress, Dickerson says many in Congress will be loath to change the controversial policy.

History teaches that it's an issue studded with land mines.

In 1993 gays were prohibited from serving in the armed forces. President Bill Clinton vowed to let them serve openly.

"The issue is whether men and women who can and have served with real distinction should be excluded from military service solely on the basis of their status," said Clinton.

"He somewhat glibly, I think, promised that he would lift the ban, and at one point said he would do it with the stroke of a pen, echoing President Truman's 1948 decision to integrate the military racially by executive order," said Nathaniel Frank, a scholar at the University of Santa Barbara's Palm Center. He opposes "Don't ask, don't tell."

"When Clinton took office, he found that he had underestimated the resistance of some in the military and of social conservatives in particular," Frank said.

So a military working group looked for another path.

Bob Maginnis, who helped craft that deal, which he supported - known as "Don't ask don't tell" - described it as "a political backroom deal. Nobody was happy.

"The military pretends that homosexuals aren't serving, and the homosexual has to pretend they're not homosexual. So all of a sudden if by chance you're discovered, then under the law you have to discharge him through a process that's been in place for a long time."

In their debate they heard warnings about the spread of AIDS. (Keep in mind this was 1993.) And AIDS was devastating the gay community.

And they considered the often-mentioned fear in conservative military circles that gay men would make unwelcome advances toward their heterosexual peers.

"Because the same-sex attractiveness is hard to control, perhaps, or predict, that the easy thing to do is to discriminate against a group of people who bring a behavior characteristic that we think is going to undermine the cohesion, the trust and confidence of building those fighting forces," said Maginnis.

That's essentially the reason given in the discharge papers for Lacye Presley and Holly Tomson: "If the soldier were to remain in the service, her conduct would only continue causing her to be a disruptive influence in this unit and the United States Army."

"So being gay would be 'disruptive'?" said Dozier. 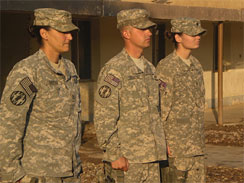 "I think this is ridiculous."

"What was she like to work with?" asked Dozier.

"She was a professional," said Cabaday. "I've known quite a few medics since I've been in, and I'd say she's one of the most knowledgeable ones I've ever known. She knew her job in and out."

"I would serve with Sergeant Presley any day, no doubt about it," said Myers. "She's one of the best medics that I've ever seen in my 18 years of service."

In at least 25 countries, gays are now serving openly, including U.S. allies like Britain, Canada and Israel's defense force, the IDF.

"If the Americans' policy is 'Don't ask, don't tell,' I think what this can be described the IDF policy as 'You can tell, but we really don't care,'" said Major Yoni Schoenfeld, who has served in the Israeli army since he was 18. He spoke to us from a base in Hebron, on the West Bank. 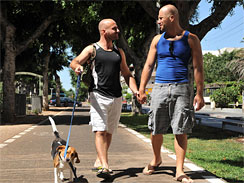 (CBS)
"My partner Noam comes to visit me and my unit twice a week, and my soldiers really like him and respect him," said Schoenfeld (left)).

And in this country, public opinion has changed markedly over the past two decades. A CBS News poll shows that 59 percent now support allowing homosexuals to serve in the military. That's up from 42 percent in 1993, the year "Don't ask, don't tell" was created.

On the other side, more than a thousand retired officers signed a statement saying don't touch "Don't ask, don't tell."

And a number of top active military officials, including Army Chief of Staff General George Casey, have lined up in the cautious camp.

"I've got serious concerns about the impact of the repeal of the law on a force that's fully involved in two wars and has been at war for eight and a half years," Gen. Casey told the House Armed Services Committee February 25. "We just don't know the impacts on readiness and military effectiveness."

The Pentagon plans to report by the end of the year on how to undo the policy.

"The military is a very different culture," said Maginnis, who is now a Pentagon consultant. He still opposes changing "Don't ask, don't tell." 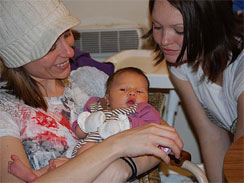 (CBS)
"The military hasn't changed that much," Maginnis said. "The country has. The culture of the United States has changed. I don't think anybody denies that. But the cold realities of what the military is trying to accomplish hasn't changed."

Under the military's new rules, Lacye Presley and Holly Thomson most likely would not have been dismissed from the military.

It's small solace: They no longer have Army careers. But they do have a family.

She's taking care of her, while Tomson has returned to Iraq, doing the same job as before . . . but this time as a civilian contractor.