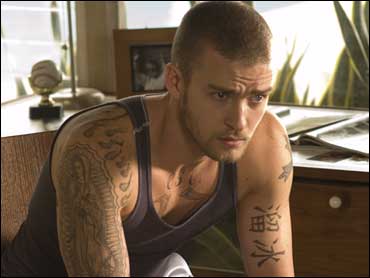 SANTA BARBARA, Calif. (CBS/AP) The case that inspired Justin Timberlake's "Alpha Dog" film has ended in a murder conviction for a marijuana dealer who kidnapped and ordered the killing of a 15-year-old boy.

Jesse James Hollywood faces a possible death sentence after his conviction for kidnapping and murdering the brother of a man that owed him $2500 for drugs.

A Santa Barbara Superior Court jury on Wednesday also found Hollywood guilty of the special circumstance allegation of being a principal in a murder committed in the course of a kidnapping and being involved in a crime in which an assault weapon or machine gun was used, making him eligible for the death penalty.

The jury deliberated for about four days. Hollywood, 29, stared straight ahead as the verdict was read.

"I can't believe they found him guilty of that murder," his father, Jack Hollywood, said outside the courtroom.

The victim's parents said they were relieved but declined to comment further because of a gag order issued in the case. Prosecutors and defense attorneys also declined to speak.

The penalty phase of the case was scheduled to begin Monday.

Hollywood was accused of orchestrating the kidnapping and eventual killing of Nicholas Markowitz in August 2000 because the teen's half brother owed a drug debt.

Nicholas was taken to Santa Barbara and held for several days before being shot and buried in a shallow grave. Four others have been convicted in connection with the crime.

Hollywood took the stand in his own defense, a move legal experts say is rare and potentially risky. He testified that he and two friends grabbed Markowitz off a street in the San Fernando Valley area of Los Angeles but did not order the teen's murder.

He said the teen was taken in an escalating dispute between him and the boy's older half-brother, Ben Markowitz. Hollywood, an admitted marijuana dealer, said Ben Markowitz owed him a $2,500 drug debt — more than twice the amount prosecutors have cited.

Hollywood said he was afraid after Ben Markowitz left threatening messages, poisoned his dog and broke a window at his home, only hours before Nicholas was abducted. Hollywood called the taking of Nicholas irrational and not well-thought out.

Hollywood said Ryan Hoyt, the gunman who was convicted and sentenced to death, acted on his own because of concern about Ben Markowitz finding out about the abduction. Hollywood also said the gun used to kill Nicholas was once his but that he gave it to Hoyt months before the murder.

Prosecutors did not call Hoyt as a witness — the one person who could definitely say if Hollywood ordered the slaying. Also left out of Hollywood's trial were Jesse Rugge and William Skidmore, two others convicted in the case.

Prosecutors contend Hollywood decided to get rid of Nicholas after learning from an attorney that he could face life in prison for kidnapping. They also believe the murder was a way for Hoyt to settle his own drug debt with Hollywood.

The crime was the inspiration for "Alpha Dog," which starred Bruce Willis, Justin Timberlake, Sharon Stone and Emile Hirsch, who played "Johnny Truelove," a character based on Hollywood.

Hollywood fled after the slaying and later testified he had lived in Colorado, the Mojave Desert and various parts of Canada before he was captured in Brazil.