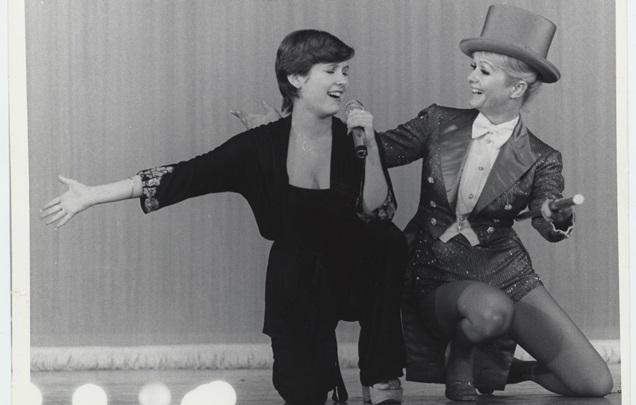 “Mother and I live next door to each other,” begins the trailer for HBO’s upcoming documentary, “Bright Lights: Starring Carrie Fisher and Debbie Reynolds.” Fisher then walks into Reynolds’ house carrying a tray of food and announces, “Mommy, mommy, I’m home!”

In light of everything that happened in December 2016 — the “Star Wars” actress suddenly collapsing on a flight from London to L.A. and ultimately succumbing to cardiac arrest, then her beloved mother dying the very next day from what many fans believe was a broken heart — this footage is heartbreaking. It’s not all sad, though. The trailer offers glimpses into the famous mother-daughter relationship that are both adorable and amusing as well.

In one scene, for example, Fisher watches her mom fiddling with a flip-phone and says, “You cannot keep that phone. That’s from when they first invented cellphones.”

“Just dandy,” Reynolds says to the camera, a grand dame of Hollywood making sure to get in the last word.

There is also a scene in which Fisher tells the camera, “I have to go start rehearsals for ‘Star Wars’ seven...ty two.” So, for fans mourning the loss of Fisher’s unique sense of humor, her wit is on display.

In another scene, Reynolds admires a garment she forgot she owned, and Fisher quips, “That’s what’s good about losing your memory is that there’s so many surprises.”

There are undoubtedly laughs to be had, but there are sober moments for pause, too.

Toward the middle of the trailer, Fisher hints at Reynolds’ declining health and her reluctance to slow down in the face of it: “My mother, she’ll forget she’s not 35. Age is horrible for all of us, but she falls from a greater height.”

Immediately afterward, the “Singin’ in the Rain” star speaks candidly about her daughter’s struggle with mental illness.

“Manic depressive is a disease that was not diagnosed then,” she explains as archival footage of a young Fisher plays. “So nobody kind of knew what was going on with Carrie.”

Most of all, it seems Fisher and Reynolds are granting us a beautiful glimpse into their relationship... one which existed at the cozy intersection of family and friend.

“Far more than I ever would want to, I know what my mother feels and wants,” Fisher adds.

If this trailer is any indication, “Bright Lights” will be a bittersweet journey for fans, laden with even more meaning in light of all that’s transpired.