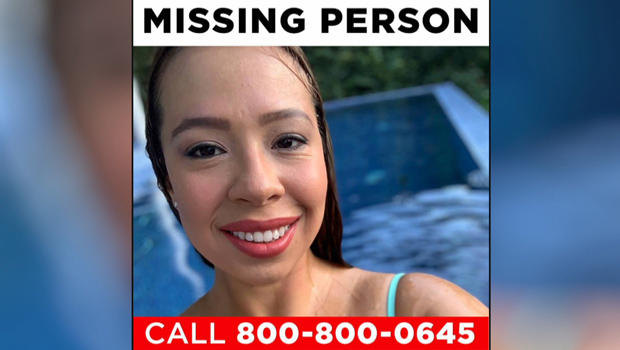 Update: Authorities said Monday afternoon a body had been discovered partially buried and inside plastic near the area where Carla Stefaniak was staying outside of San Jose. The body has not yet been identified, and officials are in contact with Stefaniak's family in an effort to make an identification. The original story appears below.

When Carla Stefaniak left her home near Miami less than two weeks ago, her family says she was looking forward to spending time in Costa Rica with her sister-in-law, to celebrate her 36th birthday. She stayed there an extra night alone.

The next morning, she disappeared.

Stefaniak was all smiles posting multiple videos and photos on social media as she and her sister-in-law April Burton spent a weeklong vacation in Costa Rica. "It seemed so safe when we were there. Everything was great," Burton told CBS News.

Because of a prior commitment, Burton left Costa Rica on November 27, the day before Stefaniak was scheduled to fly home. Now on her own, Stefaniak took an Uber to her Airbnb, then had her driver give her a tour of San Jose. After returning around 5 p.m., she told a friend it was "raining crazy" and the power was out.

She said, "It's pretty sketchy here."

At 9 p.m. that night, all communication stopped.

That was highly unusual, according to her brother, Carlos Caicedo, who spoke to correspondent Manuel Bojorquez from Costa Rica, where he's joined the search efforts.

"It was her birthday, and she loves to be on social media," Caicedo said. "So, I'm guessing every single app that there is that you can communicate [on], I'm sure she was on it."

Caicedo said, according to the owner of the Airbnb, a security guard saw his sister get into a car with her bags at 5 a.m. the next morning.

Burton said that made no sense. "Because her flight was at 1:30, and she was only 20 to 30 minutes away from the airport. And she is never early for anything."

Adding to the mystery: The family says Stefaniak had checked in online for her flight, and ordered an Uber to pick her up later that morning.

In a press conference, authorities in Costa Rica said they're investigating the disappearance. Stefaniak's brother says he has personally contacted the U.S. Embassy and local law enforcement.

Bojorquez asked, "Do you feel like they are doing enough right now to try to figure out what happened?"

"We don't know; that's totally classified," Caicedo replied. "They won't release any information. It feels like it's kidnapping, but it also seems like it could be human trafficking."

Burton said, "At this point we have to be realistic. There's a lot of bad outcomes that are possible. We just got to hope for the best."

Florida Sen. Marco Rubio's office has reached out to assist the family.

CBS News has contacted the U.S. Embassy in Costa Rica and law enforcement there, but we've yet to hear back.

Airbnb told us it has no comment, and Uber says it will assist local authorities.

If you have any information about Carla Stefaniak's disappearance, Costa Rican investigators ask you to call them at 800-800-0645, or use WhatsApp to call 8800-0645.

The mothers of Jackson, Mississippi