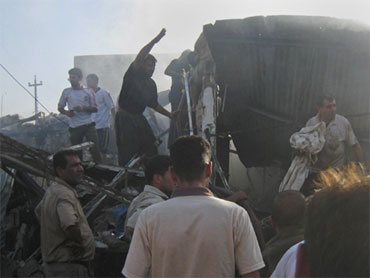 Not a single American soldier was in sight. Gone, too, were the American helicopters whose buzz has for years defined Baghdad's background track.

Left alone to protect the capital Tuesday were thousands of Iraqi troops and police manning checkpoints, with army tanks deployed at potential trouble spots and convoys of pickup trucks with machine guns roaming the streets.

But it was elsewhere, 180 miles to the north, that militants delivered their first deadly challenge to Iraq's security forces on a highly symbolic day after the formal withdrawal of U.S. combat troops from cities at midnight.

A car bombing devastated a food market in the city of Kirkuk, killing at least 33 people and wounding 90. The early evening attack, which bore the hallmarks of Sunni extremist groups like al Qaeda in Iraq, was the second in the Kirkuk area since a truck bombing killed 82 people on June 20.

The latest blast was a deadly example of the violence many Iraqis fear will increase with the departure of U.S. troops from urban areas, despite Prime Minister Nouri al-Maliki's confidence in Iraq's nascent security forces.

But al-Maliki was in no mood to back down on the day his forces assumed control of the country's towns and cities from U.S. troops, reports CSS News chief foreign affairs correspondent Lara Logan. He told the nation, "Those who think Iraqis are unable to defend their country are committing a fatal mistake."

That was clearly the message Maliki hoped to send with his new army's first parade: a flexing of Iraq's military muscle. The band played and tanks rolled by on the very same ground Saddam Hussein used to show his power.

But instead of the balcony where Iraq's former dictator so famously fired his rifle into the air, Iraq's leader chose a makeshift stand - as much due to security concerns as by design.

The parade avoided the famous crossed swords monument - so visible in parades of old. It's a symbol of Iraq's victory over Iran during the last war, now unpopular with the country's pro-Iranian government, Logan reports.

"It reminds me that there are still dangers out there," Gen. Ray Odierno, the top U.S. soldier in Iraq, said of the American deaths. "There are still people out there who do not want the government of Iraq to succeed."

But "I think sometimes you have to give up some tactical risk for strategic gain and I think this is the case," Odierno told Logan. "There might be still some little bit of tactical risk in some place but I believe it is well worth it for the strategic gain."

The strategic gain could easily be seen today - excitement on the streets of Baghdad as Iraqi forces took charge, U.S. troops nowhere in sight.

Even as Iraqis marked this milestone with pride, many were fearful of renewed violence and a government that has yet to prove it represents all of Iraq's people.

The violence marred what otherwise was a festive occasion as Iraqis commemorated the newly declared National Sovereignty Day with military parades and marching bands in the capital.

Colorful paper balls and Iraqi flags were hoisted on blast walls at checkpoints as patriotic songs blared from loudspeakers on sidewalks.

Plastic flowers and streamers decorated police and army vehicles. One car had a red heart with the English word "Love" in the middle, as if for Valentine's Day.

Some policemen danced atop their vehicles as they moved in convoys across the capital. Traffic was light in Baghdad, but particularly thorough searches at some checkpoints meant long lines of waiting cars in parts of the city.

"I felt it was normal for an Iraqi soldier, rather than an American, to order me to stop for a search," said Ali Mohsen, a 30-year-old government employee from the mostly Shiite New Baghdad district. "The Americans' cowboy style was annoying," said Mohsen, recounting his car journey to his brother's home in eastern Baghdad.

"I hope our forces will be up to the task so we can return to normalcy," he said.

Any failure on their part could plunge the country into a new round of sectarian warfare that could seal Iraq's fate for years. Success would allow reconstruction projects to go ahead and give leaders of Iraq's rival ethnic and religious groups space to negotiate an enduring power-sharing formula.

Iraqi authorities welcomed the U.S. pullback with nationalist rhetoric and celebrations in what appeared to be an attempt by al-Maliki to rally the public behind his government and secure more support ahead of an election in January.

Al-Maliki, whose three years in office saw a dramatic decline in violence, used a nationally televised address to project an air of confidence.

"Those who think that Iraqis are incapable of protecting security in their country and that the withdrawal of foreign forces will leave a security vacuum which will be difficult for Iraqi forces to fill are making a grave mistake," the prime minister said.

In Washington, President Barack Obama declared Tuesday that "Iraq's future is in the hands of its own people," warning of more violence in the days ahead but signaling optimism that Iraq will prevail as a stable, sovereign nation.

"The Iraqi people are rightly treating this as a cause for celebration," Mr. Obama said. "The future belongs to those who build, not to those who destroy."

Mr. Obama predicted new flare-ups of violence, citing the "senseless bombing" in Kirkuk - the latest in a series of attacks that have killed close to 300 people since June 20.

"Make no mistake," Mr. Obama said, "there will be difficult days ahead."

At a news conference, Odierno charged that Iran was continuing to support and train militants in Iraq who attack U.S. and Iraqi forces with rockets and roadside bombs.

"They have not stopped and I don't think they will stop," Odierno said. "I think many of the attacks in Baghdad are from individuals that have been in fact funded or trained by the Iranians."

The U.S. pullback is a significant step toward the final American withdrawal from Iraq by the end of 2011, a deadline set by a U.S.-Iraqi security agreement.

A small number of the more than 130,000 U.S. troops in Iraq will remain in the cities as trainers and advisers, and the military has said it will continue to provide intelligence, air power, medical and logistical assistance to Iraq's fledgling, 650,000-member security force. U.S. troops will go back into cities on missions only if requested by the Iraqis.

U.S. military officials have been purposely vague about the size and composition of the U.S. force that will stay on in urban areas. Publicizing a number, no matter how small, could irritate some Iraqis for whom the U.S. pullback is a proud moment of national significance. And if those troops' job description sounds too much like current combat operations, it could undermine the U.S. rationale for the withdrawal.

In a video conference with Pentagon reporters Tuesday, Odierno refused to give a figure for the force staying behind. "It's going to be different every single day," based on local needs, he explained.

Pressed, he said even a ballpark estimate would be inaccurate. "How many times do you want me to say that?" he snapped. "I don't know."

In the Baghdad news conference, Odierno said the Americans would continue combat operations coordinated with the Iraqis in rural areas and near the borders to target insurgent safe havens and disrupt foreign fighter smuggling networks.

Logistics have often been cited as among the main weaknesses of the Iraqi security forces, with a reliable fuel supply network, for example, not yet in place. Iraqi officers also complain of the time it takes to repair broken vehicles.

Privately, U.S. officers also fault the Iraqis for focusing too much on stationary checkpoints and not enough on foot patrols. They also speak of disciplinary problems and a lingering sectarian attitude among some members of the national police force, although thousands already have been fired by authorities for links to militias.