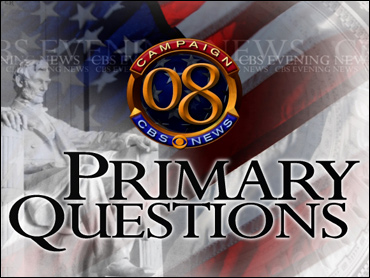 For the latest installment, Couric asks the candidates about the worst advice they've ever received - and given.

Also, check out the candidates' full responses to the previous questions in our "Primary Questions" video library.

Couric: What's the worst piece of advice you've ever given another person?

McCain: The worst piece of advice I've ever given to myself was when the confederate flag was flying over the state capitol in South Carolina. And I decided that I would say it's not an issue I should be involved in; that it should be decided by the people of the state of South Carolina. I knew it was a symbol that was offensive to so many people. And afterwards, I went back and apologized. But it was needless to say, by saying that I wouldn't have anything to do with an issue like that was an act of cowardice.

Couric: Did someone advise you, Senator, to do that?

Romney: Let's see. Well, it's typically around personal things like, you know, you really ought to get close to this person. That's the one for you. You oughta' marry this person.

Couric: Not a good matchmaker?

Romney: I'm not a great matchmaker. I can think of some of the good advice. It's funny. These questions - it's like golf as you ask these questions. You see, when you play golf, and I don't play very often, couple times a year, your bad shots you forget. The good shots you remember forever. So I can think of some great advice that I have been given. But there are - there are times when I have said to people, "You know, I think you ought to get to know this person," and it didn't work out.

Obama: The worst piece of advice that I have given to anybody was to my younger sister. She's nine years younger than me. And I think that I once told her that she should - no, no, actually I probably shouldn't tell that story. You know what …

Couric: Why? Your sister's going to be mad?

Obama: Well, right, exactly, let me pull back on that. I thought of a good story but it's just too personal.

Couric: What did you tell your sister?

Couric: Not to marry her husband or something. Now he'll be mad too.

Obama: Right something. No, no, no. It wasn't that.

Edwards: These are impossible! (Laughs) The worst piece of advice I have ever given someone. I remember - when I had a case as a lawyer, when I represented a family. I won't go through all of the circumstances. And because - I thought the case was going well … I said to them that they should not, in my judgment, accept a settlement they had been offered. And - we lost. We lost the case. And I was just dead wrong. That's the thing that pops to my mind.

Couric: And what did you tell them to do?

Edwards: I told them to go forward and let the jury decide the case. I thought we would win. And we didn't. I was wrong about that.

Thompson: There was an old lawyer down in my little home town that I started practicing law at. And you know, I had wanderlust. I had been practicing there for two years and I had a chance to become an assistant U.S. attorney and come to Nashville to prosecute criminal cases in federal government. And he advised me against doing that. And you know, I would have to say that was the worst advice because from a career standpoint, I've had a chance to do things I would never have dreamed that I'd have a chance to be doing. But I must quickly say that you never know about the road not taken. And I could've been very happy being a country lawyer, the way I had planned on being.

Clinton: Oh, I've had so much bad advice. You know, when you're in my position, like your position. I get a lot of advice. I mean, I've gotten lots of bad advice about various hair styles. Oh you've got to try this. Certain fashion mistakes that I've lived with, 'cause they're immortalized in pictures.

Clinton: Yeah, oh Yeah. I mean, I was never really frankly all that knowledgeable about what you might call style before I got thrust into the public spotlight. And so I was given, and took, a lot of bad advice over a number of years.

Giuliani: Two of my closest friends urged me not to run for mayor of New York City. And they told me I couldn't win. And then when I started winning, the friend that I'm thinking about, Jay Waldman, called me up and he said, now, I have really bad news for you. You are going to win and the job is undoable. And it turned out that well - thank God that was, you know, bad advice. They were only looking out for my best interest, I guess and they were also looking at how impossible it was, they thought to run a major city and particularly New York City where the books were written. It was ungovernable, unmanageable and they felt I was jeopardizing any career I had by running for mayor of New York City. And they advised me against it in pretty strong terms.

Huckabee: In my very first campaign, I allowed some political consultants to kind of talk me into an ad strategy that I really wasn't that comfortable with. It was in a race against Dale Bumpers who was a United States Senator. He had voted on some funding that funded some really hideous projects for the national endowment for the arts. The way the ad was done, we didn't accuse him of personally liking it, but the fact that he had voted to fund this stuff. Well, it came across that he was then able to say that I had accused him of essentially being a pornographer, which I did not, but I learned a valuable lesson. It didn't work out and I vowed then I would never ever again allow my campaign whatever, whenever and whatever the cost, to engage in a message that I personally couldn't feel good about.