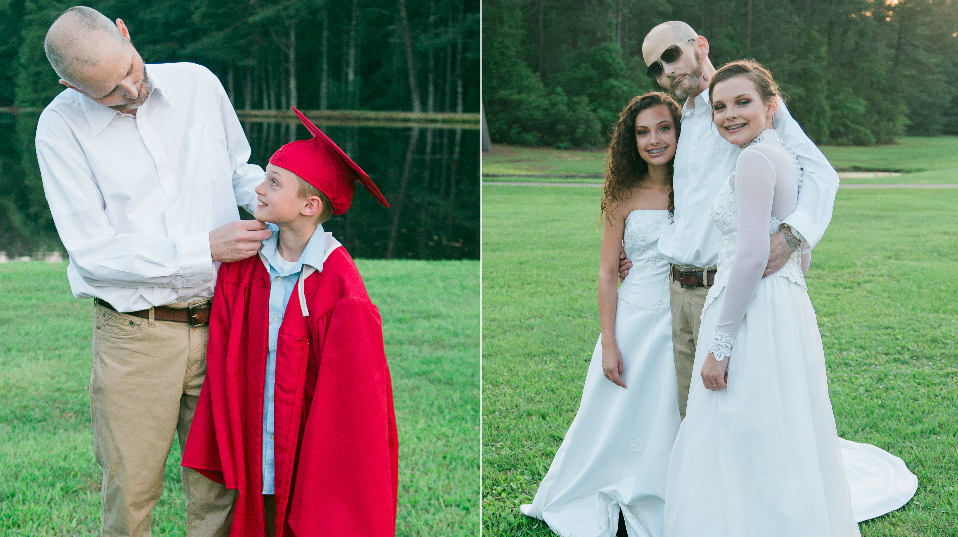 Nearly 20 years after Ray Burrow wed his high school sweetheart, Christy, the father of three is getting ready to do the hardest thing he's ever had to do — say goodbye.

The couple from Raeford, North Carolina, have been by each other's sides since they were teenagers, but as Burrow continues his 3-year-long battle with throat cancer, he knows he's nearing the end.

After multiple chemotherapy treatments along with radiation and numerous surgeries, Burrow decided to stop cancer treatments three weeks ago. He was recently admitted into a hospice center.

"Simply put, the cancer was too aggressive and his body had become too weak," Burrow's wife, Christy, told CBS News.

Now he's trying to enjoy every minute he has left with his wife and three children, Zaidee,15, Ava,13, and Nathan, 9.

But he knows he's going to miss out on future milestones like watching their graduation ceremonies, walking his daughters down the aisle, and handing them their first set of car keys on their 16th birthdays.

Photographer Amanda Ward, who has known the family for years, called Christy up last week and volunteered to take pictures of the family, free of charge, along with her partner, Jennifer Williams, of Southern Fried Photography.

Christy "had a vision for the shoot at that point," Ward told CBS News.

"I really want to have my girls photographed in wedding dresses," Christy told Ward. "I just really hate that cancer is going to take that away from my babies, take that happy memory away."

So they gathered all the necessary clothing and met for a photo shoot last week.

"I knew there was no time to waste," Christy said. "My husband and I have made every effort to keep our children's lives as normal as possible so I knew this was our opportunity to give our children memories that they would need to carry with them through some of the hardest days that are sure to come."

Zaidee wore the same dress her mom wore when she married Burrow in 1997 and Ava borrowed a family friend's dress. The girls posed next to their dad, smiling through the bittersweet moment.

It was hard to shoot the photos, but Ray exuded strength, Williams said.

"His sense of humor was still in tact," she added. "He was cracking jokes."

But there were definitely some emotional moments.

"You can see the love between his daughters and him," Williams described. "I can't even find words for it. It was so amazing, even as sick as he was, the emotion in his eyes said it all."

After taking a few shots with his daughters in their wedding gowns, Burrow mustered up the strength to stand with his son, who was wearing a graduation cap and gown.

He then posed for a few pictures with his bride. Afterward, Burrow headed to the car and pretended to hand over his keys to his children, something he had hoped to do years down the road.

While it's hard to accept he may never get to make these memories with his family, Christy said it was still a special day her family will never forget.

"This is us winning over cancer...not allowing it to take anything more away from us," she said. "I felt like the major milestones for most of us would be the best to capture for our children and that was done so beautifully."