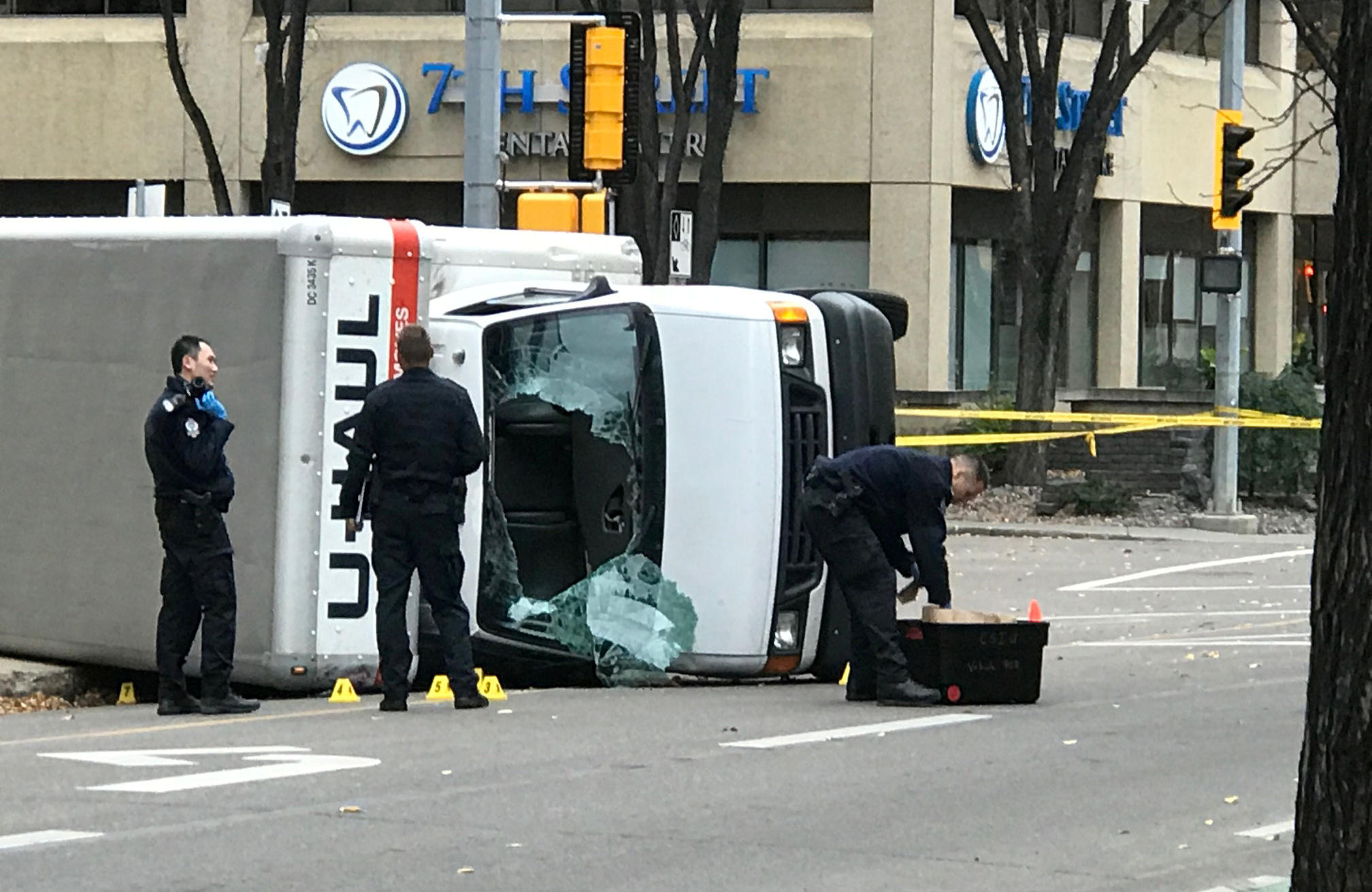 EDMONTON, Alberta -- A car and knife attack on a police officer outside a football game and a high-speed chase of a moving van that left four people injured are being investigated as acts of terrorism, Canadian authorities said Sunday.

Edmonton Police Chief Rod Knecht said officers took the suspect, later described as a 30-year-old Edmonton man, into custody and he is believed to have acted alone. Knecht said an Islamic State of Iraq and Syria (ISIS) flag was found in the car that hit the officer, and Canadian Prime Minister Justin Trudeau called it a terror attack.

The attack began outside a Canadian Football League game at Commonwealth Stadium in the western city of Edmonton on Saturday night, when police say a white Chevrolet Malibu rammed a traffic control barricade and sent an officer flying 15 feet into the air.

Knecht said the driver then got out and attacked the officer with a knife before fleeing on foot.

The officer was taken to a hospital and treated for non-life-threatening injuries while a manhunt was launched. "It's not critical," Knecht said of the officer's condition.

A few hours later, a U-Haul van was stopped at an impaired driving checkpoint north of downtown, on Wayne Gretzky Drive. Knecht said the name of the driver was similar to the name of the registered owner of the car that hit the officer.

He said the van then sped off toward downtown with police in pursuit.

Police say the vehicle swerved at pedestrians at crosswalks throughout the chase. Four people were hurt, but the extent of their injuries was not immediately known.

The van eventually flipped near a downtown hotel and the suspect was arrested. Knecht said the man was known to police but did not release his name.

Knecht said Edmonton police are working with the Royal Canadian Mounted Police's National Security Enforcement Team and other Canadian security agencies. He advised the public to remain vigilant and observant of their surroundings.

Witness Pat Hannigan told reporters he saw police pull a man from the windshield of the toppled van and estimated that 30 police cars had been chasing it.

Austin Elgie, manager of The Pint bar just west of the downtown core, also saw the van zoom by with police giving chase.

It "peeled" into an alley where people were smoking, he said.

"It was crazy," Elgie said. "It just came around the corner, ripping. I thought at first he was pulling over for the cops coming by, but he was clearly the one they were chasing."

Elgie said the van hit a man who was a bar customer.

"I have a registered nurse on my bar team, and I grabbed her and had her look after the guy until the ambulance came," he said. "He was breathing and we got him in the ambulance and he was still breathing."

It was military appreciation night at the football game between the Edmonton Eskimos and the Winnipeg Blue Bombers. Canada's chief of defense staff, Gen. Jonathan Vance, conducted the pregame coin flip at Commonwealth Stadium and two CF-18 fighter jets did a fly-past before kickoff. More than 800 Boy Scouts were expected at the game.

Canadian Prime Minister Justin Trudeau said in a statement that Canadians "stand with the people of Edmonton after the terrorist attack on Saturday that sent an Edmonton Police Service officer to hospital and injured a number of innocent people who were out to cheer on their football team and to enjoy an evening in their city."

"We cannot -- and will not -- let violent extremism take root in our communities. We know that Canada's strength comes from our diversity, and we will not be cowed by those who seek to divide us or promote fear," Trudeau said.

Canada's Public Safety Minister Ralph Goodale said on Twitter that the country "will not be intimidated by violence."

A Public Safety Department spokesman said the national terrorism threat level for Canada remains at "medium," where it has stood since the week a gunman stormed Parliament in Ottawa in fall 2014. The man killed a soldier at the national war memorial before being shot dead inside Parliament.

In France on Sunday, a man with a knife attacked people at the main train station in the southeastern city of Marseille, killing two women before being fatally shot by soldiers, officials said.