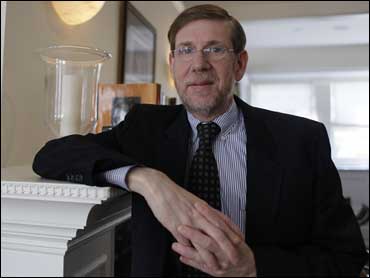 Not apples or carrots. The scientist who once led the government's attack on addictive cigarettes can't wander through part of San Francisco without craving a local shop's chocolate-covered pretzels. Stop at one cookie? Rarely.

It's not an addiction but it's similar, and he's far from alone. Kessler's research suggests millions share what he calls "conditioned hypereating" - a willpower-sapping drive to eat high-fat, high-sugar foods even when they're not hungry.

In a book being published next week, the former Food and Drug Administration chief brings to consumers the disturbing conclusion of numerous brain studies: Some people really do have a harder time resisting bad foods. It's a new way of looking at the obesity epidemic that could help spur fledgling movements to reveal calories on restaurant menus or rein in portion sizes.

"The food industry has figured out what works. They know what drives people to keep on eating," Kessler tells The Associated Press. "It's the next great public health campaign, of changing how we view food, and the food industry has to be part of it."

He calls the culprits foods "layered and loaded" with combinations of fat, sugar and salt - and often so processed that you don't even have to chew much.

Overeaters must take responsibility, too, and basically retrain their brains to resist the lure, he cautions.

"I have suits in every size," Kessler writes in "The End of Overeating." But, "once you know what's driving your behavior, you can put steps into place" to change it.

At issue is how the brain becomes primed by different stimuli. Neuroscientists increasingly report that fat-and-sugar combinations in particular light up the brain's dopamine pathway - its pleasure-sensing spot - the same pathway that conditions people to alcohol or drugs.

Where did you experience the yum factor? That's the cue, sparking the brain to say, "I want that again!" as you drive by a restaurant or plop before the TV.

"You're not even aware you've learned this," says Dr. Nora Volkow, chief of the National Institute on Drug Abuse and a dopamine authority who has long studied similarities between drug addiction and obesity.

Volkow is a confessed chocoholic who salivates just walking past her laboratory's vending machine. "You have to fight it and fight it," she said.

And the food industry points out that increasingly stores and restaurants are giving consumers healthier choices, from allowing substitutions of fruit for french fries to selling packaged foods with less fat and salt.

But Kessler, now at the University of California, San Francisco, gathered colleagues to help build on that science and learn why some people have such a hard time choosing healthier:

First, the team found that even well-fed rats will work increasingly hard for sips of a vanilla milkshake with the right fat-sugar combo but that adding sugar steadily increases consumption. Many low-fat foods substitute sugar for the removed fat, doing nothing to help dieters eat less, Kessler and University of Washington researchers concluded.

Then Kessler culled data from a major study on food habits and health. Conditioned hypereaters reported feeling loss of control over food, a lack of satiety, and were preoccupied by food. Some 42 percent of them were obese compared to 18 percent without those behaviors, says Kessler, who estimates that up to 70 million people have some degree of conditioned hypereating.

Finally, Yale University neuroscientist Dana Small had hypereaters smell chocolate and taste a chocolate milkshake inside a brain-scanning MRI machine. Rather than getting used to the aroma, as is normal, hypereaters found the smell more tantalizing with time. And drinking the milkshake didn't satisfy. The reward-anticipating region of their brains stayed switched on, so that another brain area couldn't say, "Enough!"

People who aren't overweight can be conditioned hypereaters, too, Kessler found - so it's possible to control.

Smoking didn't start to drop until society's view of it as glamorous and sexy started changing, to view the habit as deadly, Kessler notes.

Unhealthy food has changed in the other direction. Foods high in fat, sugar and salt tend to be cheap; they're widely sold; and advertising links them to good friends and good times, even as social norms changed to make snacking anytime, anywhere acceptable.

Retrain the brain to think, "I'll hate myself if I eat that," Kessler advises. Lay down new neural reward circuits by substituting something else you enjoy, like a bike ride or a healthier food.

Make rules to resist temptation: "I'm going to the mall but bypassing the food court."

And avoid cues for bad eating whenever possible. Always go for the nachos at your friends' weekend gathering spot? Start fresh at another restaurant.

"I've learned to eat things I like but things I can control," Kessler says. But he knows the old circuitry dies hard: "You stress me enough and I'll go pick up that bagel."

End of restriction on gay blood donors to face key federal vote next year
Thanks for reading CBS NEWS.
Create your free account or log in
for more features.
View CBS News In
CBS News App Open
Chrome Safari Continue
Be the first to know
Get browser notifications for breaking news, live events, and exclusive reporting.