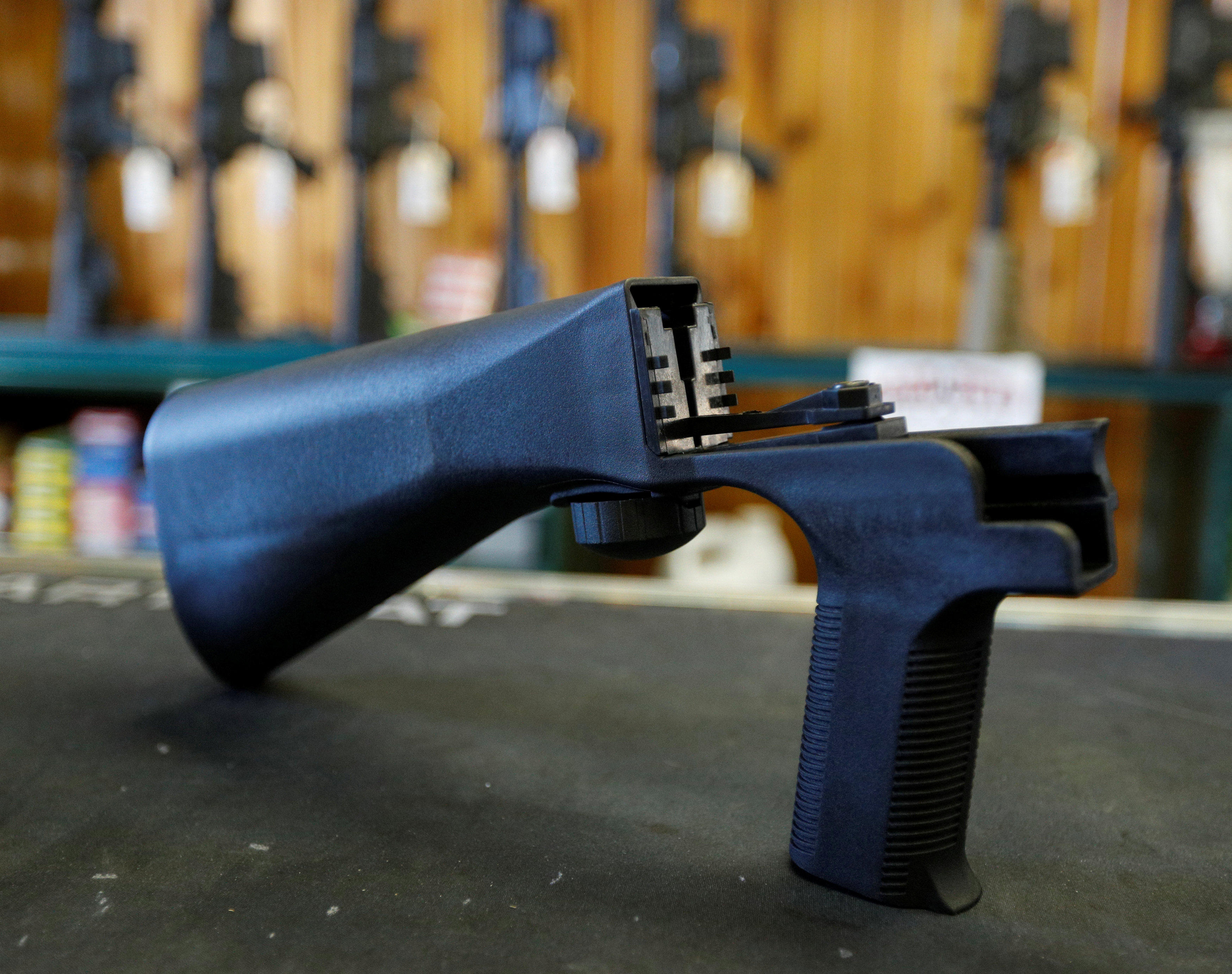 In the wake of the Las Vegas shooting, the National Rifle Association (NRA) and congressional Republicans are calling on a federal agency to ban the device that enabled the gunman to shoot hundreds of people at a country music festival.

They have suggested that the Obama administration is to blame for allowing the sale of device, known as bump stocks, and that the executive branch should simply reverse the policy. Without legislation, however, it seems unlikely that the Trump administration could do that unilaterally, given previous assessments of the device.

The Bureau of Alcohol, Tobacco, Firearms and Explosives (ATF) is the federal agency that reviewed the bump stock device manufactured by the company Slide Fire and determined in 2010 that the accessory complied with the law. Machines guns have been outlawed since 1986. ATF officials determined in their evaluation of the product that it could not be regulated by the agency.

"The stock has no automatically functioning mechanical parts or springs and performs no automatic mechanical function when installed," John Spencer, the chief of the ATF's Firearms Technology Branch, wrote to Slide Fire in a 2010 letter. "We find that the "bump-stock" is a firearm part and is not regulated as a firearm under Gun Control Act [GCA] or the National Firearms Act [NFA]."

Las Vegas shooter Stephen Paddock used a dozen bump stocks in his hotel suite, which enabled him to shoot more than 500 people at a country music festival last week. The devices allowed him to modify his semi-automatic weapons so that they fired with the rapidity of automatic weapons. He killed 58 people and wounded more than 500.

Rick Vasquez served as assistant branch chief and acting chief of the ATF's Firearms Technology Branch when the agency classified the device in 2010. He recently posted an analysis, as a former official, of the ATF's decision online. He said that it was his role, as the senior technical expert for ATF, to render an opinion or concur or disagree with opinions made by technicians in his branch as they evaluated firearm-related products. The ATF has made clear that it only has the power to regulate devices that result in multiple bullets being fired when the trigger is pulled. Vasquez explained that while bump stocks result in more rapid firing, they do so without changing the triggering of the gun.

"The Slide Fire does not fire automatically with a single pull/function of the trigger. It is designed to reciprocate back and forth from the inertia of the fired cartridge," Vasquez wrote in his recent analysis. "After much study on how the device operates, the opinion, based on definitions in the GCA and NFA, was that the Slide Fire was not a machine gun nor a firearm, and therefore, did not require any regulatory control."

In September, the ATF came to a different conclusion about another Slide Fire device, called the AutoGlove, which was to go into production that same month. As the Firearm blog described the AutoGlove, it "appears to be an electric motor strapped to a glove that when you press the switch, allows the motor to pull the trigger for you," and it claimed to fire 600-1,000 rounds per minute.

The ATF concluded that the AutoGlove did change the triggering of the gun, that it was designed to be used to convert a weapon into a machine gun, and therefore could be banned by the agency. A letter dated Sept. 11 from the ATF to Slide Fire said that the agency has held a "consistent position with regard to electronically-driven trigger devices, going back more than 30 years." Letters from the ATF in 1982 and 1988 said that an electronic motor attached to a firearm would convert it into a machine gun.

"Since the weapon fires more than one round for each single function of its trigger (a single press on the AutoGlove's Activator Plunger,) it would be a 'machine gun' as defined," the ATF wrote in its letter last month.

Speaker Paul Ryan, R-Wisconsin, suggested Wednesday that House Republicans would prefer that the executive branch overturn the regulation that has allowed bump stocks rather than a legislative fix. He said it would be the "smartest, quickest fix," adding, "We are still trying to assess why the ATF let this go through in the first place...Yes, it makes sense that this is a regulation that probably shouldn't have happened in the first place."

A request for comment from the ATF was not immediately returned.

A number of congressional Republicans last week said that they were open to investigating the legality of -- or even banning -- bump stocks. The National Rifle Association (NRA) said last Thursday that they should be regulated, but then CEO Wayne LaPierre told CBS News' "Face the Nation" on Sunday that the ATF should "do its job." He wouldn't commit to supporting legislation that would ban bump stocks.

Reps. Carlos Curbelo, R-Florida, and Seth Moulton, D-Massachusetts, have introduced a bipartisan measure that would ban bump stocks in the House. Sen. Dianne Feinstein, D-California, has introduced a similar bill in the Senate.