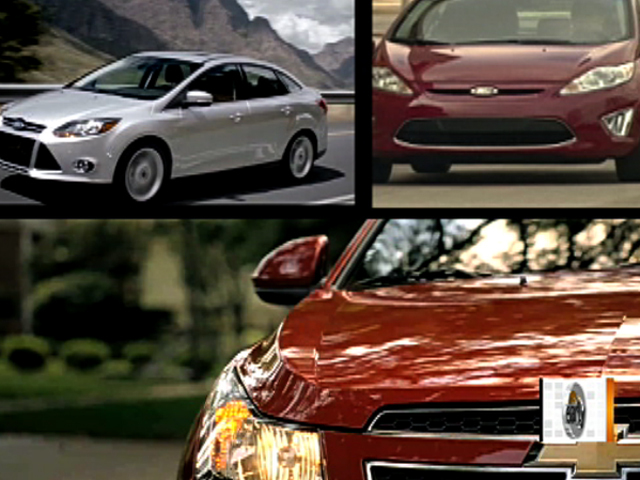 Americans are buying smaller cars in bigger numbers. And for the first time in decades, the U.S. auto industry says it's ready, eagerly responding to satisfy that demand.

On "The Early Show," Mark Fields, executive vice president of Ford Motor Company, said, "We made huge investments in small cars because right now consumers are embracing small cars in a big way. And it's really pleasing to see how consumers are rewarding us for that investment."

When asked about the company's view of gas prices, Fields said Ford has an outlook that gas prices are going to continue to stay high and go higher in coming years.

He says the company began to have that point of view three or four years ago.

Co-anchor Erica Hill said that's a change that is "somewhat a long time coming in this country, especially compared to the rest of the world."

She asked, "You think the lag in moving over and embracing the smaller vehicles was on the part of the American consumer or on the part of Detroit not getting it?"

Fields said, "Well, I think, you know, a combination of, you know, we took a point of view a couple of years ago to invest heavily in small cars because we looked at consumer trends. Took a point of view of what was happening with a gallon of gasoline. I also think consumers may perhaps in the past had a perception that you had to compromise when you had to buy a smaller car. And the great news is when consumers come to our showrooms, there's this 'aha' moment where they say, you know, I can get the comfort, the ride and handling, the great design, and great fuel economy. So for a lot of consumers when they walk in the showroom, that 'aha' moment is turning into an 'I want to buy that' moment, which is a good sign for us and the industry going forward."

As for the U.S. auto industry on a global scale, Fields said America is "on par" with other competitive markets, such as Europe.

He said, "(With the consumer movement to smaller cars) the U.S. - and particularly Ford - can compete with the best in the world, no matter what part of the world we're in."

As the unofficial start of the summer driving season begins to ramp up - with average gas prices nationally at 3.79 a gallon - more car buyers are thinking about going smaller to save bigger at the pump.

One potential buyer told CBS News she will probably save up to $2,000 a year driving a small car.

Another buyer, Adam Gonzalez, purchased the Chevy Cruze - the company's top-selling compact car. Why? He says it's an American option that has good gas mileage and is "still sporty."

CBS News business and economics correspondent Rebecca Jarvis noted being more hip and sporty is all a part of Detroit's new campaign to lure American car buyers back to the Big Three. Superstar rapper Eminem, for instance, has offered his image in recent commercials to help sell the American brands.

Auto industry analyst Maryann Keller told CBS News, "There is a new reality that says people will buy smaller cars and that they can make money on them."

In fact, one in four cars sold in the U.S. in April was a compact or subcompact car. And in the past year, the share of compact American cars sold jumped from 20 to 27 percent.

In addition to capturing demand for smaller cars with models like the Cruze, Ford Focus and Fiesta, Detroit's Big Three have capitalized on the shortage in Japanese cars, left in the wake of that country's massive earthquake and tsunami.

General Motors recently announced plans to invest $2 billion in its plants and just recently reopened a factory in Lordstown, Ohio, which is creating jobs and employs 4,500 people. The factory makes the Chevy Cruze model.

Rebecca Lindland, of IHS Automotive, an auto industry information company, said, "They also serve the greater good. They support the dealerships, and the people that service that dealership. So there's a lot of good, positive ripple effect when we're adding manufacturing jobs."

Jarvis added on "The Early Show" that auto analyst Keller said, while interest in small cars often diminishes when gas prices drop, she believes this time the interest will be sustained, and fuel economy will remain a priority when people search for their next car.