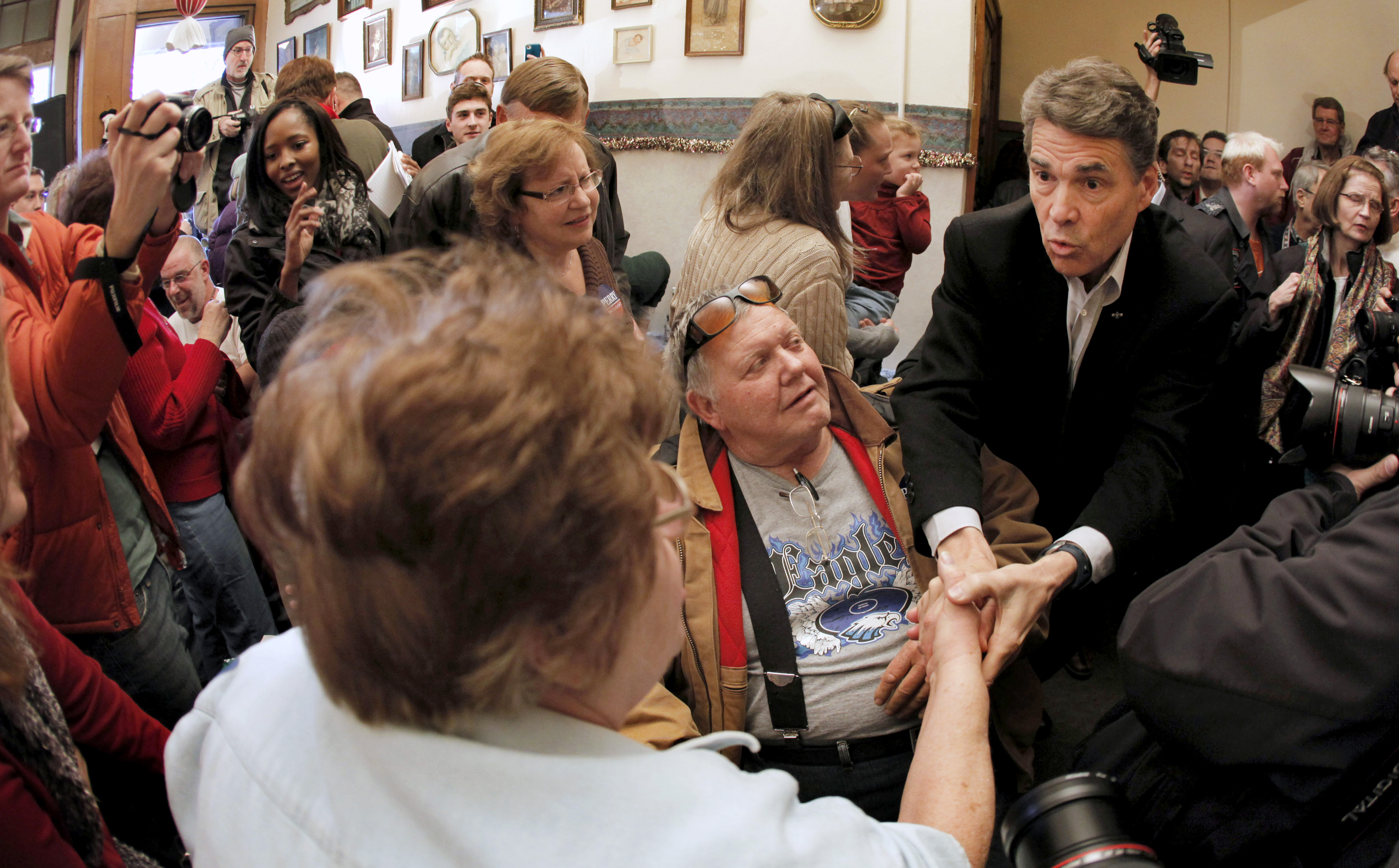 WATERLOO, Iowa -- Rick Perry's events have taken a turn for the crowded. He'll arrive, typically, to find that a coffee shop built to accommodate 75 people is crammed with up to twice that many, spilling out the door and jammed into every available corner.

The crowds are excited, too. They'll murmur "mmm-hmms" and exclaim "yeahs!" as he winds through his stump speech, breaking into loud applause when he calls for a balanced budget amendment, a part-time Congress and the end of Obamacare. Despite the excitement and enthusiasm, though, the Texas governor remains very firmly stuck in the middle of a race for third place in the Iowa caucuses with Rick Santorum and Newt Gingrich.

The problem? The enthusiastic crowds he draws are made up heavily of the fabled undecided voters in this cycle. Voter after voter at his events will tell you they like Perry. But they also like Santorum, former Massachusetts Gov. Mitt Romney, and Rep. Michele Bachmann. And while Perry's numbers have crept into the mid-teens in recent weeks, there's still disconnect between his increasingly large crowds and somewhat stagnant showing in the polls.

"The question is whether these crowds are really representative of his level of support across the state and thus there's some movement that polls haven't picked up yet, or whether instead these are simply curiosity-seekers wanting to see part of the carnival," said Drake University politics professor Dennis Goldford.

The good news for the Texas governor is that his poll numbers have improved since his November doldrums when he could barely break 10 percent. Perry isn't denying that he's drawing big crowds of undecided voters. But he's convinced he's breaking through.

"What I'm feeling, what I'm seeing what I know is happening is they're leaving and I know they're going to be caucusing for us on the third of January," he told CBS News/ National Journal.

Conversations with voters suggest Perry's rising numbers are a result of his 14-day bus tour across the state that gives him a chance to display his famed retail politics skills. Some showed up to his town hall in Marshalltown, Iowa with a number of candidates in mind -- but left the event saying they were sold on him.

"He got my vote," said Edward Hermsen, a Marshalltown resident. Ruth Knudson, also from Marshalltown, came to the event with her eye on Romney, Perry and Santorum, but said she left a likely Perry caucus-goer.

"I probably will think some, however, I have to tell you, I was very impressed and he has a good chance of getting my vote," Knudson said after the event.

The issue between now and the caucuses is just how many voters Perry can connect with. "The problem for Perry is whether in fact this message get broadcast any further than those crowds that are actually showing up,' Goldford said.

The end of the pre-caucus debates may actually be a detriment for Perry, who enjoyed a string of solid debates in December after an embarrassing gaffe in a Nov. 9 debate in Michigan, when he blanked on remembering the third federal agency he wanted to abolish (the Energy Department).

His biggest threat now, say both Goldford and University of Iowa political scientist Timothy Hagle, is the other Rick.

Santorum is finally experiencing his mini-surge, and he stands to chip away at some of the evangelical Christian voters that represent the overlap in his and Perry's support. Perry has moved swiftly to take down his newly threatening opponent, waiting less than 24 hours after a a CNN/Time/ORC poll showed Santorum at 16 percent to start attacking him on the stump as an "earmarker." (Santorum has defended getting earmarks for his state before congressional Republicans banned the practice.)

"Just yesterday, once again, he defended his prolific pork-barrel spending," Perry said Friday in Waterloo. "So Sen. Santorum, just to get a little more specific here, please tell me why you asked taxpayers to support the bridge to nowhere in Alaska. Why did you ask the taxpayers of Iowa to support a teapot museum in North Carolina, an indoor rainforest in Iowa, and the mountain sheep institute, Montana sheep institute? Why were those important enough for you to vote for?

Hagle warned that "if you see a large move toward Santorum, I think some of the Perry people may go as well." That could happen if voters stuck in the Perry-Santorum-Bachmann triangle - many of whom have already abandoned Bachmann - decide that Santorum is the most viable candidate.

"You hope when you vote for someone they can make it the whole way," said Knudson, the voter from Marshalltown. Here's the good news for Perry: she added, "I think he can."

The candidate himself seems to be feeling good, no doubt having had his spirits buoyed by an NBC News-Marist poll of Iowa that showed him in fourth place with 14 percent, wedged between Santorum, on the rise with 15 percent, and Gingrich, on the decline with 13 percent.