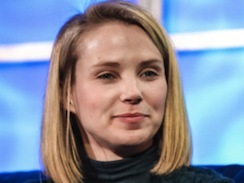 (MoneyWatch) COMMENTARY Longtime Google (GOOG)executive Marissa Mayer is without a doubt an intriguing choice to run Yahoo (YHOO). I certainly didn't see it coming, but then I doubt anyone did.

Personally, I favored appointing interim chief Ross Levinsohn as the Web portal's permanent CEO. But I guess that would have been too easy for a company that for the past five years has become synonymous with making bad CEO choices.

Still, it's possible that Yahoo's luck in picking chief executives has changed. Not likely, but possible.

Looking back over Yahoo's previous leadership missteps, it was nearly five years ago to the day that I had almost the same initial impression about another controversial CEO choice: "Jerry Yang as a turnaround CEO? I admit -- I didn't see that coming." I concluded that, while Yang was a co-founder of the company and a brilliant visionary, he wasn't the right guy for the job. As we know all too well, that turned out to be a pretty good call.

New Yahoo CEO faces formidable taskHow not to turn around a companyCarol Bartz and the CEO's dilemma
Can Yahoo, Best Buy, and Sony survive?

By contrast, Carol Bartz, who replaced Yang, sure seemed to be making all the right moves out of the gate. But the famously raucous executive turned Yahoo's search business over to Microsoft (MSFT) and never delivered what Yahoo needed most -- a new vision for the company. Guess I got that one wrong.

As for Scott Thompson, who was next in line, the exec never looked like a game-changer from the get-go, and the backwards way he went about trying to come up with a new strategic direction for the company proved it. Yahoo shareholders owe activist investor Dan Loeb a world of thanks for figuring out the guy doctored his resume and getting him booted.

That pretty much leaves me with a 2 and 1 record, so I need to get this Mayer thing right or I'm 50-50 and no better than a monkey (all due respect to all you monkeys out there).

So would I have picked Mayer for the job? No, and I'll tell you why.

Indeed, Mayer's got a lot going for her. She's a self-proclaimed geek with major technical chops. She makes most workaholics look like slackers. She's smart and articulate. She grew and ran Google's search business for years. She knows the market intimately.

All that said, running a big company is really hard. Executing a turnaround is way harder. There's nothing higher on the executive toughness scale than a first-time CEO trying to reinvent a broken company. There's just no getting around that. So her odds of success are pretty slim.

I know that's likely to be an unpopular view given Mayer's stellar track record at Google, but it's the cold hard reality of the situation.

In defense of Yahoo's current board, I think Mayer's a better choice for the job than either Jerry Yang or Scott Thompson was. And with the possible exception of Levinsohn, who will likely bolt now that he's been passed over, she may well have been the board's best option. Nevertheless, I don't see Yahoo making a big comeback under Mayer.