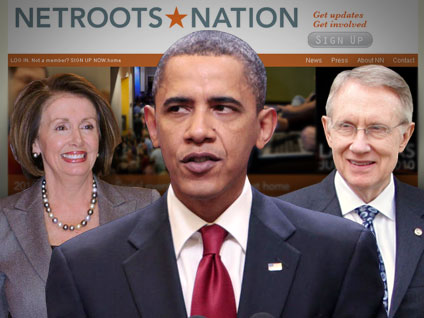 LAS VEGAS -- Senate Majority Leader Harry Reid had something of an admission for liberals this weekend: "I know there are times, I'm told, that I get on your nerves," he said at the Netroots Nation conference. "I'm here to tell you, you get on my nerves."

He added, "Let's all understand this country would be in a lot more trouble if we weren't around."

The Netroots Nation conference, now in its fifth year, attracted more liberal bloggers and activists than ever before this year, even as polls show Democratic voters are less enthusiastic about voting this year compared to Republicans. Yet the movement that gained its footing opposing the Bush administration and a Republican Congress is now coming to grips with the disappointment many have with the Obama administration and the current Democratic Congress.

This past weekend's conference felt less like a call to action from the left than a therapy session in which the liberal netroots acknowledged that, for now, the Democratic establishment is still their best hope for change in Washington.

But they say the party needs to address systemic government flaws like the filibuster if they want to prove they're serious about overcoming Republican obstructionism. Furthermore, the base says, Democrats can work on closing that enthusiasm gap by supporting candidates and proposals that adhere to their values by showing the party cares more about citizens than corporate interests.

What's Their Problem with Democrats?

Even as Reid told the Netroots audience that this Congress has been the most productive in American history, he acknowledged that its accomplishments have in some ways let liberals down. Even President Obama's signature health care reform package disappointed the left because it left out measures like a "public option," as well as prescription drug reimportation. Many progressive bloggers accused Democrats of capitulating to corporate interests on those points.

"I wish we had a public option," Reid insisted.

Health care reform was just one issue to surface since the start of the Obama presidency that has given liberals the impression Democrats have yet to change the outsized influence special interests have in Washington. Some events, like the Supreme Court's Citizens United decision, were out of the Democrats' hands.

"Citizens United was a watershed moment for people because it just solidified what people believed was happening," said Ilyse Hogue, a spokesperson with the liberal grassroots group MoveOn.org.

And while this Democratic Congress and administration were not responsible for the blow out that started the massive oil spill in the Gulf of Mexico, many say the party has failed to hold BP's feet to the fire in wake of the accident.

"Voters are incredibly frustrated with the fact that they can't seem to get a fair shake but corporations can," Hogue said.

The resentment many voters feel toward Washington leaves Democrats in a bind heading into the 2010 midterms, since they are the party in power. Democrats have so far painted the elections as a choice between continuing on a path forward set by Democrats or going back to the Bush era.

But if Democrats really want to win back voters' trust, the left says they must run not just against Republicans, but also against the filibuster, which enables minority-party obstructionism. They must also, activists say, put leaders in power that rein in special interests.

Any Democrats or the Right Democrats?

For many liberals, it won't matter if Democrats lose seats this November. Daily Kos founder Markos Moulitsas, an organizer of the Netroots conference, said on the event's opening night that even with the Senate's 59 Democrats, "We don't have a genuine progressive majority."

Liberals point to Democrats like Sens. Ben Nelson of Nebraska or Blanche Lincoln of Arkansas (whom the left tried to kick out in a primary) who have in some cases sided with Republicans on critical policy issues.

But at the same time, the left is embracing other Democrats, who they say can win and represent the people well.

North Carolina Secretary of State Elaine Marshall, at left, for instance, is heading into a Senate race against incumbent GOP Sen. Richard Burr with strong momentum, but little cash. Marshall recently used up quite a bit of her cash to defeat in a runoff her primary opponent, Cal Cunningham, who was backed by the Democratic Senatorial Campaign Committee.

"A lot of folks like an underdog," Marshall said. "I didn't have the support of some people out of this state that is sometimes influential to other people."

A recent Democratic internal poll shows Marshall slightly ahead of Burr, who has led in other polls.

Marshall said voters are generally listless right now because they "really think Washington is not listening to them," or considering their economic hardship.

Political gamesmanship that short changes voters has angered people, she said, such as the horse trading that happened during the health care debate.

"People were very, very angry as certain states got tremendous concessions that people just resented," Marshall said. "Some of it becomes very, very blatant, and American folks are pretty much fed up with that kind of stuff."

While some elected Democrats may be more favorable to liberal voters than others, so are some appointed regulatory officials. The left is zealously fighting for the nomination of Elizabeth Warren to head the new consumer protection bureau established in the recently-passed financial reform bill.

Warren, a Harvard professor who helped shape the plan for the new agency, has "broad trust among the American people," MoveOn.org's Hogue said, because she has "always spoken out loud and proud" on behalf of regular Americans.

At Netroots, where Warren was a featured speaker, she seemed to generate more enthusiasm than many politicians on the November ballot.

Pelosi: Obama was Happier about Health Care than Getting Elected
Governors' Races are 2010's Main Event, Strategists Say
In 2010, Will Democrats Offer More Than Anti-Tea Party?

Just as the left is eagerly advocating on behalf of Warren, the liberal base is also feverishly pushing for the end of the filibuster.

Netroots attendees pressed Reid about whether he would support a measure to scale back the procedural rule, which allows a single senator to indefinitely uphold a debate unless there are 60 senators who want to stop him. Reid gave an answer that suggested he supported reform without actually committing to anything.

Democratic Sen. Tom Udall of New Mexico, however, plans to see where his colleagues really stand on the issue, on the first day of the new Congress next year.

"I challenge my fellow senators to join me and fix the rules on the first day," he said at Netroots. "The Senate's inability to act ... is unacceptable and unsustainable."

Udall said that the Senate has accomplished historic achievements this year. Nevertheless, he said, "with Republicans forcing 60 votes on every single major bill, not enough is getting done. Democrats pay the price for the Republican obstruction because we can't tackle the major issues facing our country."

The technical legal tactic has fired up activists. The nonpartisan group Common Cause launched a petition against the filibuster after it was used to hold up an extension of unemployment benefits. Additionally, one activist from Common Cause said at Netroots that the group is planning to challenge the filibuster in federal court.