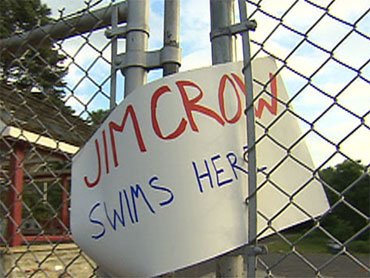 A suburban Philadelphia swim club's board should resign to settle claims that the club canceled the pool memberships of dozens of minority children because of their race, a lawyer for most of the children's families said Monday.

Michael Kuldiner said Monday that he expects to file a federal lawsuit within a week on behalf of most of the families and the day camp, Creative Steps Inc., against The Valley Club in Huntingdon Valley.

Kuldiner said he is also seeking the removal of all club members who used racially derogatory language when the black and Hispanic children went swimming June 29.

Another lawsuit had already been filed Friday by attorney Brian R. Mildenberg, who represents one child and his mother, although the suit also demands unspecified damages on behalf of several unnamed children and parents.

The Creative Steps camp had arranged for 65 mostly black and Hispanic children to swim each Monday afternoon at the gated Huntingdon Valley club, which is on a leafy hillside in a village straddling two overwhelmingly white townships.

But after the group arrived June 29, camp director Alethea Wright said, several children reported hearing racial comments and some swim club members pulled their children out of the pool.

The president of the swim club's board of directors, John Duesler Jr., said late Monday that he has only heard of Kuldiner's call for the board's resignation from reporters.

Asked whether he would resign if necessary to resolve the dispute, Duesler said, "Absolutely, yes."

Duesler said he has tried unsuccessfully to get someone to take his place for the past couple of years.

"This is a small community club. This is not a country club, just a Memorial Day to Labor Day club run by volunteers," he said.

Duesler has said the club's decision was made because there were too many children in the pool and the situation was unsafe, not because of racial concerns. Earlier Monday, he said the club wanted to find a way to deal with the safety concerns, such as hiring more lifeguards, and that the club voted overwhelmingly Sunday to invite the Creative Steps children back.

"We realized it was the right thing to do," Duesler said.

But Wright said she would not accept the offer.

"The children are permanently scarred," she said.

"She has already said so," Carvalho said Sunday night. "She doesn't want people to look at her the same way."

Dymir Baylor, 14, said he heard the racial comments himself.

"I'm afraid if we go back, we'll get put in the same situation," Baylor told the Inquirer.

The swim club has claimed it has a diverse, multiethnic membership, but member Amy Goldman, a member for two years, said she couldn't remember seeing a black member this year.

The Pennsylvania Human Relations Commission has reportedly opened an investigation and will make a fact-finding visit to the club July 30.

U.S. Sen. Arlen Specter, D-Pa., said Friday he had asked the U.S. Department of Justice to investigate "to determine what action, if any, is warranted by the Civil Rights Division."

Others to criticize the club include the National Association for the Advancement of Colored People and the United States' highest-profile black swimmer, Olympic gold medalist Cullen Jones, who said Thursday that "hearing about what's happened to these 65 kids is both disturbing and appalling."