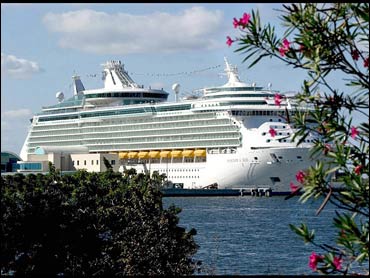 Coast Guard crews have suspended their search for an Ohio man who apparently went overboard early Monday while on a cruise to the Bahamas.

Friends of Daniel DiPiero, 21, of Canfield, near Youngstown, last saw him on the Mariner of the Seas around midnight Sunday. Authorities say shipboard security cameras rolling about two hours later show a man appearing to be DiPiero leaning on a rail near the front of the ship, then going overboard.

FBI and Coast Guard investigators Wednesday interviewed DiPiero's companions, other guests and crew members aboard the ship, according to Royal Caribbean International.

The cruise line flew DiPiero's family to the ship, which delayed its departure from St. Thomas until midnight Wednesday.

DiPiero was reported missing Monday morning when his friends realized he had not slept in the cabin they shared. Royal Caribbean International notified the Coast Guard on Monday evening, after searching the ship and Coco Cay, an island owned by the cruise line.

Vessels and aircraft from the U.S. and Bahamian Coast Guards searched 900 square miles of ocean between Grand Bahama Island and Coco Cay. The ship had departed from Port Canaveral.

This is not the first time Royal Caribbean has had to pull into port without everyone on board. Last summer, George Allen Smith IV, 26, of Greenwich, Conn., disappeared from the line's Brilliance of the Seas, apparently after a night of drinking. Blood stains were found on a canopy that covers life boats, but his body was never found.

Smith's family accused Royal Caribbean of covering up the disappearance, an allegation the company has denied. The FBI has been investigating Smith's disappearance.