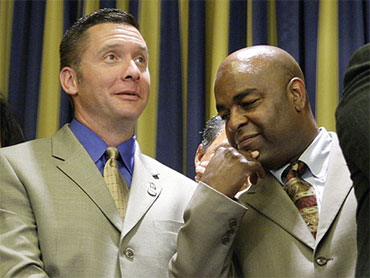 A multiracial group of police officers on Friday stood with the white officer who arrested a prominent black Harvard scholar and asked President Barack Obama and Gov. Deval Patrick to apologize for comments the union leaders called insulting.

Hours after the union news conference, Mr. Obama interrupted the White House press briefing to announce he had spoken to Crowley and said it was unfortunate that his comments had inflamed the situation.

While Mr. Obama said he "could have calibrated his words differently," he stopped short of apologizing for his remarks.

He called Crowley a "good man" and said the incident was likely an "overreaction" on the part of both Gates and Crowley.

O'Connor said Mr. Obama's remarks were "misdirected" and the Cambridge police "deeply resent the implication" that race was a factor in the arrest.

"President Obama said the actions of the CPD were stupid and linked the event to the history of racial profiling in America," O'Connor said. "The facts of the case suggested that the president used the right adjective but directed it to the wrong party."

A black police officer who was at Gates' home when he was arrested said he fully supports how his Crowley handled the situation.

Sgt. Leon Lashley said Gates was probably tired and surprised when Sgt. James Crowley demanded identification from him as officers investigated a report of a burglary. Lashley says Gates' reaction to Crowley was "a little bit stranger than it should have been."

Gates has said he was the victim of racial profiling, but when asked if Gates should have been arrested, Lashley said supported Crowley "100 percent."

Lashley called Mr. Obama's remark "unfortunate" and said he should be allowed to take it back.

Crowley was present at the news conference, but did not speak.

But Mr. Obama walked in on Gibbs' afternoon press briefing to discuss the matter further with the press.

Officers responded to Gates' home on July 16 after a woman called 911 and said she saw two black men with backpacks trying to force open the front door. The woman, Lucia Whalen, has not responded to repeated attempts for comment.

Gates has said he returned from an overseas trip, found the door jammed, and that he and his driver attempted to force it open. Gates went through the back door and was inside the house on the phone with the property's management company when police arrived.

Police said he flew into a verbal rage after Crowley asked him to show identification to prove he should be in the home. Police say Gates accused Crowley of racial bias, refused to calm down and was arrested. The charge was dropped Tuesday, but Gates has demanded an apology, calling his arrest a case of racial profiling.

Gates, 58, maintains he turned over identification when asked to do so by the police. He said Crowley arrested him after the professor followed him to the porch, repeatedly demanding the sergeant's name and badge number because he was unhappy over his treatment.

Crowley has refused to apologize, saying he followed protocol.

In the wake of the controversy, Crowley has received consistent support from his fellow officers.

Patrolman Carlos Figueroa, who was also at the scene of the incident, said he and Crowley were investigating a report of a burglary at Gates' home near Harvard University, and they needed to be sure everyone was in the house legally. He said that's why Crowley asked Gates for his identification.

Figueroa said Gates shouted "No, I will not!" He also says Gates was shouting at Crowley, calling him a racist and saying, "This is what happens to black men in America!"

Figueroa told The Associated Press on Friday that he and Crowley did what they were supposed to do.

Cambridge Police Commissioner Robert Haas, in his first public comments on the arrest, said Thursday that Crowley was a decorated officer who followed procedure. The department is putting together an independent panel to review the arrest, but Haas said he did not think the whole story had been told.

"Sgt. Crowley is a stellar member of this department. I rely on his judgment every day. ... I don't consider him a rogue cop in any way," Haas said. "I think he basically did the best in the situation that was presented to him."

White House: No More To Say On Gates

He said, He said Saga in Cambridge

Cop Who Cuffed Gates Tried to Save NBA Pro

Gates Speaks out about His Arrest