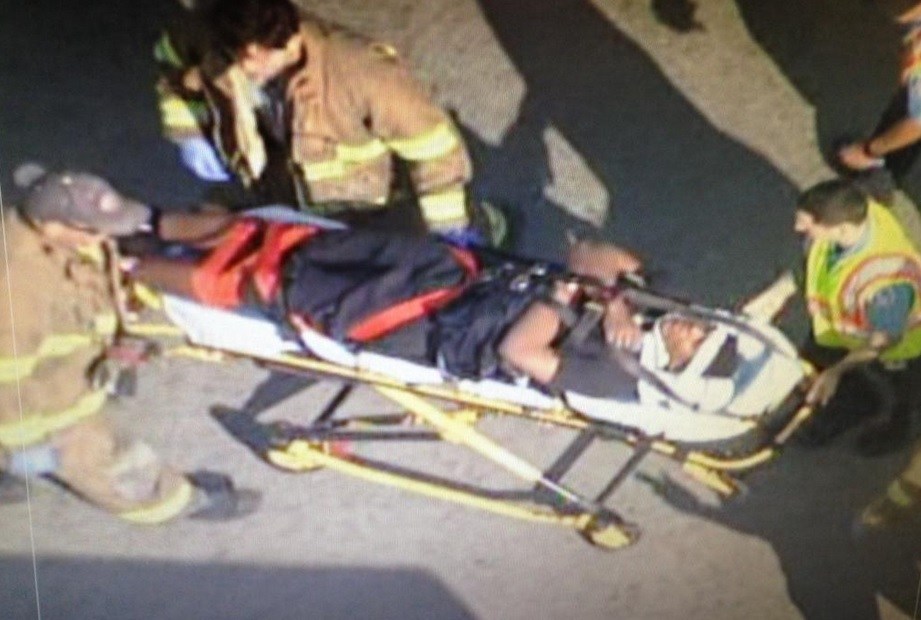 CHARLOTTE, N.C. -- The Carolina Panthers say quarterback Cam Newton suffered fractures to his lower back in a car crash in Charlotte on Tuesday.

Newton will spend the night in the hospital after being involved in a two-vehicle crash not far from the team's stadium in Charlotte, the team said.

Television footage showed Newton on a stretcher being placed in an ambulance. The Panthers said he was in fair condition at Carolinas Medical Center where he will remain overnight for observation.

Photos from The Charlotte Observer showed the 25-year-old Newton smiling as he was attended to by an officer on the ground.

A black pickup truck that Charlotte-Mecklenburg police spokesman Robert Tufano said Newton was driving was overturned on the roadway with debris scattered all over the street. The roof was caved in and a tow truck later was hauling it away. Another car that appeared to be involved in the crash had front end damage.

Police were investigating how the crash happened on a bridge that crosses busy I-277 in the shadow of Bank of America Stadium, where the Panthers play.

Newton has 2,800 yards passing this season with 16 touchdowns and 11 interceptions. He also has rushed for 425 yards and 3 touchdowns to lead the Panthers to a 4-8-1 record.

An Atlanta native, Newton led the Auburn Tigers to a national championship in 2010.

Newton threw three touchdown passes in Carolina's 41-10 win over the New Orleans Saints on Sunday, his best game in nearly a month-and-a-half. He also broke a string of eight straight games with an interception.

The win put the Panthers back in the playoff hunt, one-half game behind the Atlanta Falcons and New Orleans Saints (both 5-8).

Newton was the No. 1 overall pick in the 2011 NFL draft and was the franchise's starter right away. He has only missed one game this season, the opener at Tampa Bay. Newton has one year left on his rookie contract after the Panthers picked up a $15 million option for 2015.

The Panthers have repeatedly said Newton is a guy they view as their franchise quarterback moving forward.

Bu it has been a rough year the two-time Pro Bowler.

After the Panthers fell at home to the San Francisco 49ers in the NFC divisional playoffs in January, Newton had ankle surgery in March that sidelined him for all but one of the team's spring practices.

He returned for the start of the training camp, but then suffered another setback when he fractured his ribs during a preseason game against the New England Patriots.

He has said he's not been close to 100 percent all season.

Derek Anderson is the team's backup quarterback and would be first in line to replace Newton if he is unable to play Sunday against Tampa Bay (2-10). Anderson started and led Carolina to a season-opening victory against the Bucs.

An Atlanta native, Newton led the Auburn Tigers to a national championship.