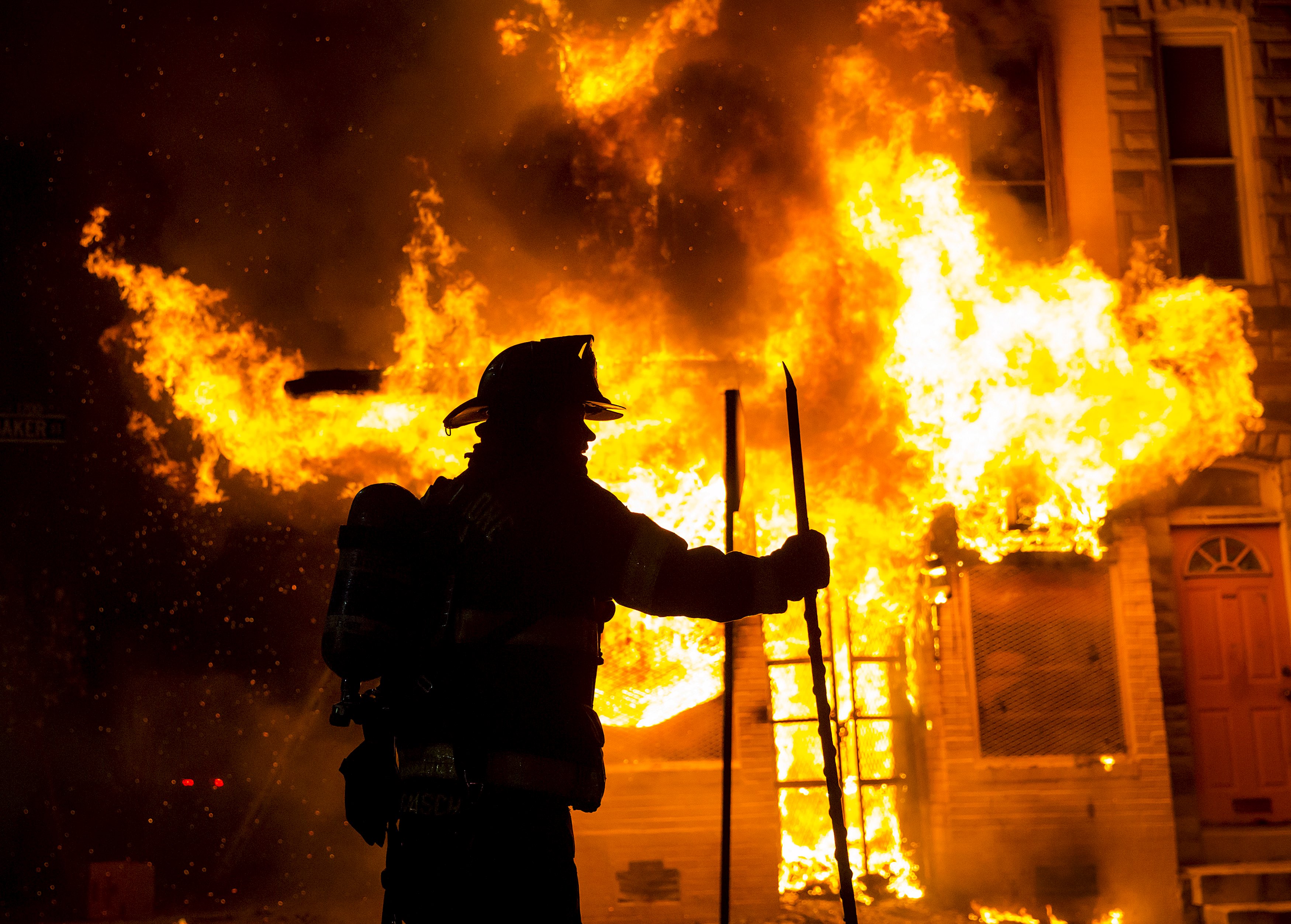 BALTIMORE -- National Guardsmen fanned out across the city, police with riot shields blocked streets, and firefighters doused smoldering blazes Tuesday after looting and arson erupted in Baltimore following the funeral of a black man who died in police custody.

It was the first time the National Guard was called in to quell unrest in Baltimore since 1968, when some of the same neighborhoods were convulsed by violence after the assassination of the Rev. Martin Luther King Jr.

The rioting started in West Baltimore on Monday afternoon - within a mile of where Freddie Gray, 25, was arrested and placed into a police van earlier this month - and by midnight had spread to East Baltimore and neighborhoods close to downtown and near the baseball stadium.

At least 15 officers were hurt, including six who were hospitalized, police said. There were 144 vehicle fires, 15 structure fires and nearly 200 arrests, the mayor's office said.

On Tuesday, President Barack Obama condemned the riots, saying, "there's no excuse for the kind of violence that we saw."

Mr. Obama also called the deaths of several black men by police "a slow-rolling crisis." He said it's not new, but there's new awareness from cameras and social media.

The streets were calm Tuesday morning. Residents of one neighborhood were already showing up with brooms and trash cans to try to clean up the street, a CBS News producer reports, adding that several people with shovels and brooms were outside the CVS. All were volunteers.

Firefighters could be seen spraying the burned-out shell of a large building.

"We're not going to have another repeat of what happened last night," Maryland Gov. Larry Hogan vowed after a visit to a West Baltimore neighborhood where cars were burned and windows smashed. "We're going to make sure we get Baltimore back on track."

Hogan said there are "a couple of thousand" National Guardsmen and police officers in Baltimore, with more on the way.

Gray's death under still-mysterious circumstances has become the latest flashpoint in the national debate over the use of police force against black men.

Police said in a news release sent while Gray's funeral was underway that the department had received a "credible threat" that three notoriously violent gangs are now working together to "take out" law enforcement officers.

The rioting was the worst such violence in the U.S. since the turbulent protests that broke out over the death of Michael Brown, the unarmed black 18-year-old who was shot by a white police officer in Ferguson, Missouri, last summer.

The city was under a 10 p.m.-to-5 a.m. curfew beginning Tuesday, and all Baltimore public schools were closed.

"I understand anger, but what we're seeing isn't anger," Mayor Stephanie Rawlings-Blake lamented. "It's disruption of a community. The same community they say they care about, they're destroying. You can't have it both ways."

State and local authorities pledged to restore order but found themselves responding to questions about whether their initial response had been adequate.

Rawlings-Blake waited hours to ask the governor to declare a state of emergency, and the governor hinted she should have come to him earlier.

"We were all in the command center in the second floor of the state House in constant communication, and we were trying to get in touch with the mayor for quite some time," the governor said at a Monday evening news conference. "She finally made that call, and we immediately took action."

Rawlings-Blake said officials initially thought they had gotten the unrest under control, "and I think it would have been inappropriate to bring in the National Guard when we had it under control."

The rioters set police cars and buildings on fire, looted a mall and liquor stores and threw rocks, bottles and bricks at police in riot gear. Police responded occasionally with pepper spray.

"They just outnumbered us and outflanked us," Baltimore Police Commissioner Anthony Batts said. "We needed to have more resources out there."

Batts said he is "extremely disappointed in this beautiful city tonight. ... This is not protesting, this is not your First Amendment rights, this is just criminal acts doing damage to a community that is challenged in some ways that do not need this and do not need to be harmed in a way that we have today."

The governor said he was temporarily moving his office from Annapolis to Baltimore on Tuesday.

Maj. Gen. Linda Singh, adjutant general of the Maryland National Guard, said up to 5,000 troops would be available for Baltimore's streets.

Despite the relative calm Tuesday, the Baltimore Orioles postponed a second straight game against the Chicago White Sox after the rioting. The team says it made the decision after consulting with Major League Baseball, and state and local officials.

Maryland Rep. Elijah Cummings and about 200 others, including ministers, tried unsuccessfully to quell the violence at one point Monday night, marching arm-in-arm through a neighborhood littered with broken glass, flattened aluminum cans and other debris.

As they got close to a line of police officers, the marchers went down on their knees. They then rose to their feet and walked until they were face-to-face with the police officers, who were in a tight formation and wearing riot gear.

But the violence continued, with looters later setting a liquor store on fire and throwing cinderblocks at fire trucks as firefighters labored to put out the blazes.

There were even some tense moments among family members. One Baltimore mother was trying to tame violence when she realized her son was throwing rocks at police. Video caught the woman smacking the boy and chasing him when he walked away.

"I'm not going to be as nice as everyone else. I am simply pi--ed off. This is the city I love, this is the city that I chose to dedicate my life to and we cannot stand idly and let thugs - whatever you want to call them - I won't even say they're thugs, we're going to call them cowards, ruin our city," CBS Baltimore quoted Councilman Brandon Scott as saying.

At one point, Baltimore police tweeted a plea for cooperation:

Gray was arrested April 12 after running away at the sight of police, authorities said. He was held down, handcuffed and loaded into a van. Leg cuffs were put on him when he became irate inside. He died of a spinal cord injury a week later.

Authorities said they are still investigating how and when he suffered the injury - during the arrest or while he was in the police van, where authorities say he was riding without being belted in, a violation of department policy.

Six officers have been suspended with pay while the investigation continues.

The riot came amid a national furor over the deaths of several black men at the hands of police - from the Brown case in Ferguson to the chokehold death of Eric Garner in New York and the shooting of Walter Scott in North Charleston, South Carolina.

While they are angry about what happened to Gray, his family said riots are not the answer.

"I think the violence is wrong," Gray's twin sister, Fredericka Gray, said late Monday. "I don't like it at all."