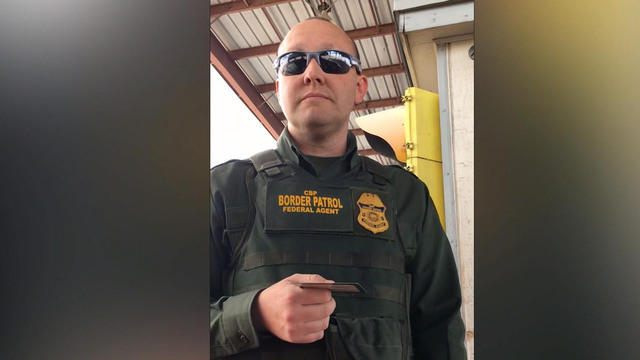 Cellphone video of a confrontation at a border patrol checkpoint is stirring up new controversy in the immigration debate.

A California teacher posted a video of border patrol agents detaining her after she refused to say if she was a U.S. citizen at a checkpoint in New Mexico, about 35 miles from the border.

The video has many wondering if she was within her rights or had an obligation to comply.

When San Diego resident Shane Parmely was stopped at a New Mexico border patrol station she refused to answer the agent's questions. She was heading home from vacation with her three children and asked one of them to start recording the exchange.

The videos have generated thousands of views on Facebook and sparked a heated debate on immigration rights.

The middle school teacher says she did it after hearing her Latino friends talk about their experiences at checkpoints.

"It made me feel sick to get asked, knowing what my friends have been through. It just made me feel physically ill," Parmely said.

"They do more than ask that I'm a citizen. They will ask where my kids go to school, they'll ask what grade they're in. They'll ask what type of job I have," said Gretel Rodriguez, one of Parmely's friends.

In the video, Parmely asked, "So what's the grounds? What's the violation for being detained?" The border patrol agent responded, "You know what? Just for you. Here you go, U.S. Supreme Court."

The Supreme Court does allow agents to set up checkpoints within 100 miles of the border and ask questions about citizenship without warrants.

Asked what kind of avenues border patrol agents have to verify citizenship, Nieblas said, "Well, they need a reasonable suspicion that the individual is either committing a crime or is here unlawfully and that's difficult to ascertain by someone just saying I don't want to answer a question."

On Facebook, some applauded Parmely's activism while others criticized her actions.

One person wrote, "I am sorry but you are disrespectful. The boarder [sic] patrol is doing a job that must be done."

"There are a lot of criticisms that seem to basically be on this logical fallacy that if you question authority, you're disrespectful. And I disagree," Parmely said.

Parmely says she was let go after 90 minutes without answering the question.

In a statement, the border patrol says they may detain a driver for a reasonable amount of time until they can make a determination about immigration status.

It says its policy is to treat all individuals with dignity and respect.

Controversial Texas book to be republished