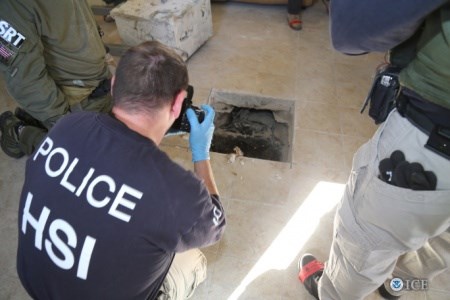 SAN DIEGO -- U.S. authorities say they have discovered a secret cross-border tunnel in the California desert.

Authorities scheduled a news conference Wednesday afternoon in a residential area of Calexico, a city of about 40,000 people located 120 miles east of San Diego.

A media advisory from federal authorities says the tunnel links Calexico with the large industrial city of Mexicali, Mexico, but provided no details.

Dozens of tunnels designed to smuggle drugs have been found along the U.S.-Mexico border in recent years. Some have been equipped with hydraulic lifts and electric rail cars.

When Guzman escaped from prison for the second time in July, he did so through a mile-long escape tunnel that opened up right into his shower stall, the only corner of his tiny cell security cameras couldn't see.