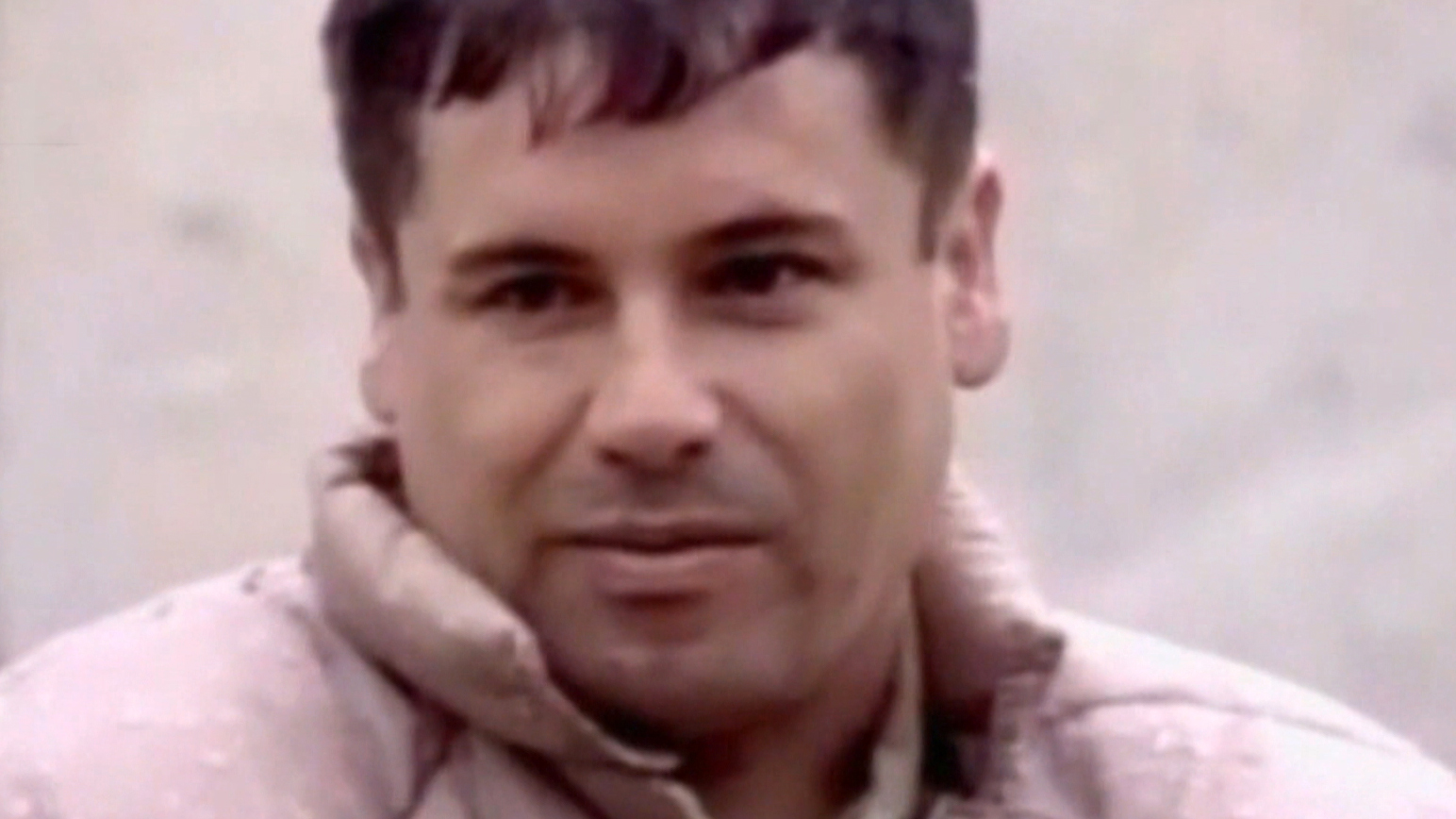 The following script is from "El Chapo" which aired on Feb. 21, 2016. Bill Whitaker is the correspondent. Howard Rosenberg and Ana Real, producers.

The notorious narco known as El Chapo has achieved one of his greatest aspirations. He is the most famous drug lord of all time. This is our fourth 60 Minutes story about El Chapo, whose real name is Joaquin Guzman.

Our first story came when he was captured after 13 years on the run. We told you then that El Chapo -- Spanish for "Shorty" -- was on Forbes list of billionaires and had earned an outsized reputation for his worldwide smuggling empire, his ruthless brutality and most of all, for his daring getaways like the one we told you about last year when he vanished from a maximum-security Mexican prison through one of his trademark escape tunnels.

Then there was our interview with actor Sean Penn -- who met Guzman at a hideaway last fall. After El Chapo's stunning prison break, many thought he'd never get caught again. But he was. How? You're about to see.

Bill Whitaker: Where in the pantheon of drug traffickers, drug lords, does El Chapo fall?

Peter Vincent: El Chapo resides at the very top of that hierarchy.

Peter Vincent was a senior official and legal adviser of both the Justice Department and Homeland Security during the international manhunt for Guzman. He says after the daring escape last summer, he became almost delusional.

Bill Whitaker: What precipitated his downfall?

Peter Vincent: He became drunk on his own wine. He started to believe the hype that he was special, that he was almost a demigod, that he was something truly magical. And he became so incredibly arrogant that he thought he was untouchable.

Jim Dinkins agrees. As chief of Homeland Security investigations, he was part of the U.S.-Mexico task force that nabbed El Chapo in 2014.

Jim Dinkins: He knew how he was captured last time. So he had the upper hand, right. He had all the cards in his hand to go off into the sunset and to learn from his mistake. But he just couldn't help himself. And he remained in the public eye.

After his first escape from prison in 2001, Guzman virtually disappeared from sight for 13 years. But not this time.

Jim Dinkins: Here he gets out of prison, and he's on the road being spotted at this place having you know, drinks, and this place, you know-- with his family members.

Bill Whitaker: He invited Sean Penn, and the actress Kate del Castillo to come in to see him.

Bill Whitaker: Did Mexican law enforcement know that these two actors were going in to see El Chapo?

Jim Dinkins: Oh, absolutely. They knew that sh-- where Sean was gonna go, when he was gonna land. They knew right away.

How did they know? Because they were listening in on the cartel's communications and watching. Mexican and U.S. law enforcement reformed the task force that caught El Chapo the last time.

They were tracking not just Guzman, but everyone in his inner circle including his cook. And everyone his lieutenants contacted including Sean Penn.

Bill Whitaker: Did he become sloppy?

Jim Dinkins: Definitely. There was more sightings of him in the last six months than there was in the first-- last 10 years of before he was captured in 2014.

Bill Whitaker: After he escaped the last time you told us that you were not confident that he would ever be captured again.

Bill Whitaker: That El Chapo had become a smarter criminal. Did you overestimate his intelligence?

Jim Dinkins: I truly did. Here he had over a year in prison. I presumed he was using that same amount of time to think about how he was going to be-- remain a fugitive for the rest of his life.

Mexican officials told us only 20 days after his escape, the marines picked up on Guzman's trail.

Peter Vincent: They created an even smaller team of Mexican marines, a search bloc. And they focused on the prize at hand, that was capturing El Chapo Guzman alive, if they-- absolutely could.

Their first opportunity came in early October, just days after Sean Penn's visit. The marines told us they waited because they didn't want the American actor caught in the crossfire. A team of marines approached one of El Chapo's mountain top ranches by jungle road, while another group of commandos flew in by helicopter.

Bill Whitaker: What went wrong on that October mission?

Peter Vincent: As I understand it, despite all of El Chapo Guzman's bravado of being a macho, very powerful man, he was running with a child in his arms.

Bill Whitaker: A human shield-- a baby as a shield?

Peter Vincent: That-- that's the only way-- that one can rationally see it.

So once again, El Chapo got away. In early December, intelligence led the marines to this house in the sleepy coastal town of Los Mochis in northern Sinaloa. Wiretap intercepts talked about a visit planned by "grandma and aunt"-- code names for El Chapo and his lieutenant, known as "Cholo Ivan."

The marines watched the house for a month as painters and construction crews came and went then on the morning of Thursday, January 7th, "grandma" finally showed up.

An assault force quickly moved into position nearby. That evening, someone in the house called out for a large order of tacos and this armored truck left to go pick up the food. Chapo was having a party.

Peter Vincent: For an incredibly savvy, clever, almost a criminal genius that El Chapo Guzman was, he ultimately was done in by very simple tastes.

Bill Whitaker: What do you mean?

At 4:40 a.m., in the pre-dawn hours of Friday, January 8th, the marines began battering down the gate of Chapo's safe house. We've concealed the identities of the commando leaders for their safety.

Bravo: So when we first-- en-- knock on the door of this house, the shooting started.

A fierce gun battle erupted. The first marine through the door was shot in the arm.

Bill Whitaker: I watched the videotape. It's very intense.

Alpha: Chapo's people inside the house were firing high-caliber rounds-- grenades. So it was like a warzone.

The marines moved methodically through the house. Chapo's henchmen retreated up the stairs. Just inside the door, one gunman lay dead. Down the hall, four more taken prisoner and the commandos quickly check a walk-in closet covered with full-length mirrors.

Up the stairs the marines find two women, one of them the cook, cowering on the bathroom floor. Outside the house more commandos fought it out with gunmen who fled across the roof tops.

When it was over, there were five cartel members dead and six in custody, but once again, Chapo with Cholo Ivan had vanished.

A couple of days later, the marines took us to the safe house in Los Mochis in an armed convoy. Here, just inside the gate, a pool of blood where the marine was shot.

And inside the door, more bloodstains, the walls pockmarked with bullet holes and the scars of exploding shrapnel. And remember that walk-in closet? The mirrors masked a hidden door.

Bill Whitaker: Behind the secret door, the entrance to one of El Chapo's trademark tunnels. It's connected to a network of storm drains and sewers.

It was 45 minutes before the marines found Chapo's escape route and that morning the marines gave chase.

Alpha: We intensified the search inside the tunnels, opening the manhole covers, and inserting people in those sewers.

Then it started raining hard.

Bravo: After 20 minutes of rain, we thought the Chapo may-- may-- drown in the sewers because of the high level of the water.

Bill Whitaker: So he popped up out of the manhole right in the middle of a busy street.

Bravo: That was his only option.

Bill Whitaker: This is where he came out. He popped up the manhole cover. It's about a half mile from the house, straight down that road.

Look carefully at this security camera footage from the gas station across the street. At 8:55 a.m., four hours after the first shots were exchanged -- right there, you can see Chapo and Cholo Ivan climbing out of the sewer and then in this cell phone video, you can see them carjack a white VW Jetta and speed away.

The fugitives got only three blocks before the Jetta broke down so, they jacked a second car, a red Ford Focus, but only a couple of miles out of town that car broke down. Within minutes, the Federal Emergency Center got two reports of hijacked vehicles. On the highway out of town, the marines found the Ford, already on the bed of a tow truck. But no sign of Chapo or his lieutenant. They had been picked up by the federal police and taken to a nearby motel.

Bill Whitaker: What were they doing in the backseat of the police car?

Alpha: They weren't talking. They were relaxed. But they looked confused.

No one knows why the federal police took Chapo to the motel instead of jail, but Peter Vincent has a theory.

Peter Vincent: And El Chapo undoubtedly said, "One, you let me go now and I will make you wealthier beyond your wild imaginations. " If you should choose to decline my most generous offer I am not only going to kill you but I am going to rape and kill your wife and your daughters and I'm going to torture your sons.

Bill Whitaker: He has behaved like that in the past?

Peter Vincent: He has behaved like that virtually his entire criminal career.

Peter Vincent: Bribes and threats, bribes and bullets. And luckily the Mexican marines showed up, realized what was going on and took control of the situation.

Chapo was flown to Mexico City for booking. He was paraded before reporters and returned to Altiplano, the same prison from which he escaped last July.

Juan Pedro Badillo is a lawyer who only has one client, El Chapo. He warns extradition can be a lengthy process.

Bill Whitaker: How long do you think the whole extradition legal proceedings will go on?

Peter Vincent: El Chapo Guzman knows that, if he is ultimately extradited to the United States it's essentially game over for him.

Peter Vincent: It sends an incredibly powerful message to current kingpins, to future narcotraffickers that: "You may run, you may hide but ultimately this multinational force will track you down from the highest mountains or the deepest, darkest jungles, or through stinking sewers of towns and cities anywhere in the world, and bring you to justice."