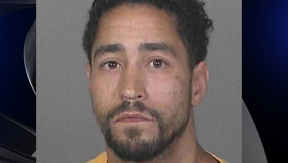 LANCASTER, Calif. -- A man whose four dogs mauled a 63-year-old woman to death was found guilty Friday of murder.

A Los Angeles County jury convicted 31-year-old Alex Jackson of second-degree murder in the death of Pamela Devitt, CBS Los Angeles reported. He could get 24 years to life in prison when he is sentenced Oct. 3.

Devitt was out for a morning walk in the desert town of Littlerock on n May 9, 2013, when she was set upon by four pit bulls.

The coroner said she died from blood loss after being bitten 200 times. The dogs dragged her 50 yards, took off her scalp and removed an arm.

Prosecutors said Jackson was not just negligent but knew that his animals could endanger someone's life. They presented evidence that Jackson's dogs were involved in at least seven other altercations in the 18 months leading up to the attack on Devitt.

Several horseback riders said they had been chased or bitten by Jackson's dogs. Neighbors said the dogs jumped over the fence and made it difficult to retrieve mail. A mail carrier testified that he was unable to make a delivery to Jackson's residence because of a threatening dog that eventually chased his vehicle for half a mile.

"At some point, something needs to be done about these stray dogs, and I think an unfair amount of responsibility is being directed at my client," Al Kim said. "Does that mean he's a murderer? Absolutely not."

The National Canine Research Council estimates about 30 people are killed by dogs each year. Murder charges are rare because prosecutors must prove that the defendant knew the dogs were dangerous before the killing.

Jackson testified he was unaware of most of the incidents. He said if he thought the dogs were capable of killing someone, he would have gotten rid of them.

At the time of his arrest, Jackson had eight dogs living at the home he shared with his mother. He had placed the four involved in the attack in his garage.

"I feel terrible about it. This isn't anything that I orchestrated or planned, that I wanted to have happen," he said.

Animal control officers testified that an inebriated Jackson told them shortly after the attack: "If you mess with me, you're coming into the lions' den."

The victim's husband, Ben Devitt, said he wanted a guilty verdict "so it sets a precedent and makes people aware that their dogs can create a dangerous situation."

Jackson was also found guilty of three drug charges. Police said that when they first went to his property to investigate the mauling, they found a marijuana farm. The drug charges included cultivating marijuana and possession and sale of a controlled substance.

Jackson was found not guilty of an assault charge stemming from an alleged run-in with a horseback rider who claimed his dogs also attacked the horse.