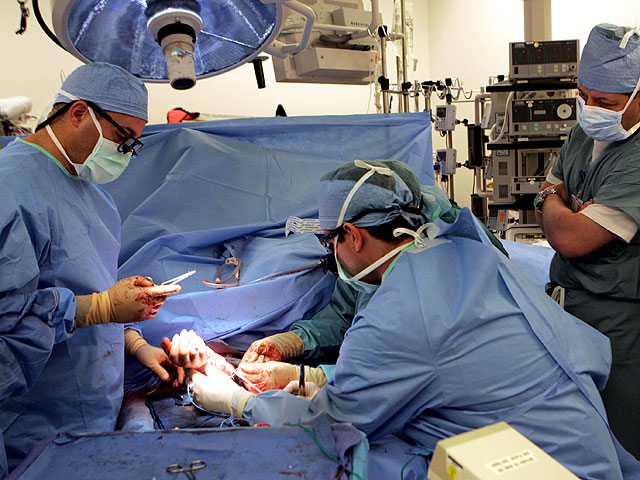 (CBS/AP) A traffic accident took away her right hand nearly five years ago, but now a 26-year-old mom is joining her doctors for a press conference to show off her newly transplanted "donor hand."

The California woman got the limb last month at the Ronald Reagan UCLA Medical Center in Los Angeles in a marathon 14-plus hour operation performed by a team of nearly 20 surgeons, nurses and support staff. They grafted a hand from a deceased donor onto the patient and painstakingly connected bones, blood vessels, nerves and tendons.

The transplant was the 13th such case in the U.S. and the first for the hospital.

The patient was able to move her fingers soon after the surgery. She faces months of rehabilitation and must take antirejection drugs for the rest of her life.

Hand transplantation has come a long way since the first was carried out in Ecuador in 1964, before the development of modern immunosuppressive therapy. The transplant failed after two weeks and the transplanted had to be amputated.

In 1998, French doctors performed a hand transplant that lasted two years. The recipient failed to take drugs as ordered, and his body rejected the limb.

The UCLA operation cost about $800,000, but since it was experimental, the patient did not have to pay.

Little has been revealed about the donor except that the hand matched the patient's in terms of blood type, size and color.

A week after the UCLA operation, doctors at Emory University Hospital in Atlanta performed the nation's 14th hand transplant. The recipient was 21-year-old Linda Lu, who had her left hand amputated as a baby due to complications from a rare disease.

Lu's lead surgeon, Dr. Linda Cendales, said many who undergo a hand transplant tend to feel more sensation than if they wore a prosthetic, and they are able to open doors, tie their shoes or turn the pages of a newspaper.

"They will never have a normal hand," Cendales said. "But they do recover enough sensation to differentiate between temperatures, and rough and smooth surfaces."