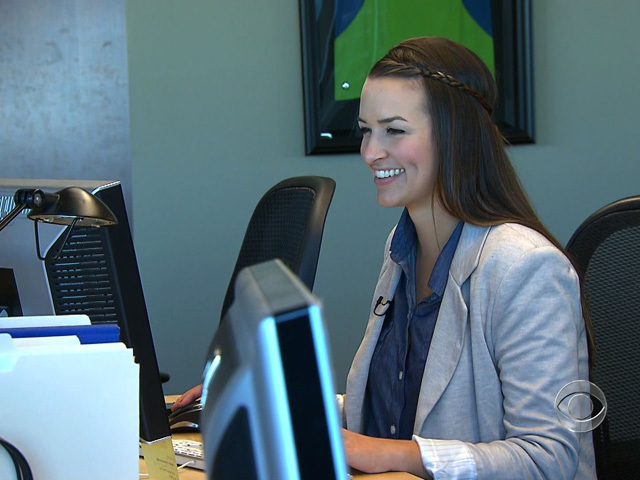 Holiday sales are one measure of the economy -- job creation is another. And in one very large state hard hit by the recession, employment prospects are beginning to brighten. CBS News correspondent Bill Whitaker has a few cases in point.

Brittany Dameron, 25, unemployed, with two degrees in advertising, diligently looked for work for a year.

"I was applying to a lot of agencies, changing my resume, really working on my cover letters, and I still wasn't getting the gig," she said.

But her fortunes changed in October when she walked through the doors and was offered a job at Digitaria, a high-tech, digital marketing agency that helps business take advantage of the digital revolution.

"We do everything from websites, iPad applications, mobile applications," explained Daniel Khabie, CEO of Digitaria. He said revenue is up 60 percent this year.

"We've hired 50 employees and we're looking to hire at least a minimum of another 20-plus employees going into the next year," said Khabie. "I wouldn't be surprised if we hire another 50, to be honest with you."

Companies like Digitaria are turning California's economy around. The country's largest state created more jobs than any other, adding 233,000 workers to the payrolls in the past year -- 6,500 in just the last month. The hot spots: high-tech centers where jobs are up in Silicon Valley, San Diego, San Francisco and Orange County.

Despite the growth, California still has the second highest unemployment rate in the country -- 11.3 percent. It's tied to manufacturing and construction, sectors hit hardest in the Great Recession.

Now digital-age companies could be key to California's recovery. Oliver Duncan found he was in high demand in high-tech. He left a job in New York and is now creative director at Digitaria.

"I had over four solid letter offers and I had a bunch of 'Hey, I'm really interested, let's take the next step,'" he said.

Dameron: "It's a great feeling to not be asked that question anymore, 'How's the job search going?', and to just be able to say, 'I have a job.'"

It's been a long time since there's been economic news to smile about in California.This is the third month in a row the state has lead the nation in job growth.