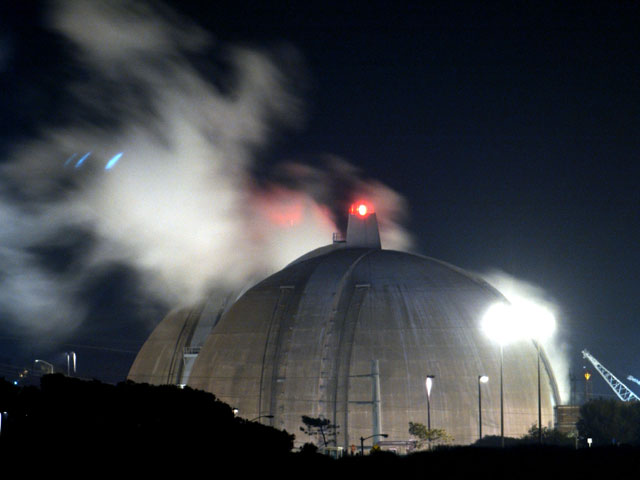 The U.S. gets about 20 percent of its electricity from nuclear power plants. Most are over 30 years old.

CBS News correspondent John Blackstone reports that the disaster in Japan disaster raises new questions about the safety of two plants in California that were built in earthquake zones.

One nuclear plant raising questions is in San Diego County. Farther up the coast, there's a plant that sits near several fault lines.

Avila Beach is a laid-back resort town on the central California coast that for more than 25 years has lived next door to a giant: the Diablo Canyon Nuclear Power Plant.

Its two nuclear reactors have been operating here in earthquake country since 1985 without any major problems. Some residents say the nuclear plant is just something they have to live with.

However, the scenes of damaged nuclear facilities in Japan are giving others here second thoughts.

"It's kind of like, you want to get out of here a little sooner," said resident Ashley Johnson.

Diablo Canyon is within about 60 miles of the San Andreas Fault and much closer to at least three smaller faults. One of them, the Shoreline, is less than a mile away and was discovered just three years ago.

Pacific Gas and Electric, which owns the plant, says it was built to withstand a 7.5 earthquake, and none of the faults in the region are expected to produce anything bigger.

However, the Japanese also assumed their nuclear plants would hold up, says Victor Gilinksy, a former member of the Nuclear Regulatory Commission.

"It does tell you that your assumptions about safety may be wrong," Gilinsky said. "I think we really need to go back and take a look at our systems and make sure that our assumptions are still valid."

California isn't the only part of the country than can have earthquakes. What geologists call "seismic hotspots" are scattered across the country. There are 104 commercial nuclear reactors in the US, including those operating in earthquake zones.

There are also other natural hazards. In 1992 Hurricane Andrew knocked out power to the Turkey Point plant south of Miami for 5 days, but the plant survived. Nuclear power supporters point out that even the accident at Three Mile Island in 1979 didn't result in the disaster first feared. The newest nuclear plants are built to an even higher standard.

With Diablo Canyon here sitting right on the coast there is also now concern about a tsunami, but geologists say a tsunami as big as the one that hit Japan is unlikely in this part of California.