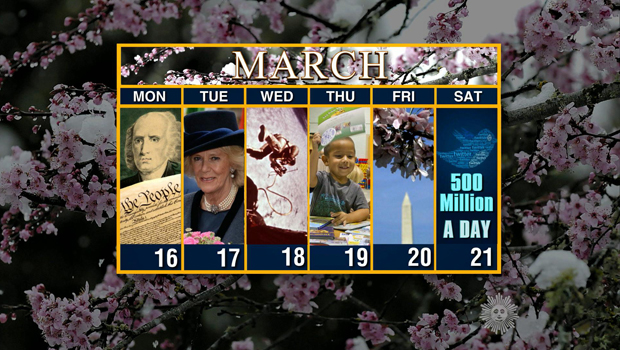 
Monday is Freedom of Information Day, a celebration of transparency in government that coincides with the birthday of President James Madison, the father of the Constitution.


Tuesday is Saint Patrick's Day, of course, as well as Day One of a four-day visit to the United States by Prince Charles and his wife, Camilla, the Duchess of Cornwall.


Wednesday marks the 50th anniversary of the first spacewalk by Soviet cosmonaut Alexei Leonov. American astronaut Edward White made the first U.S. spacewalk two and a half months later.


Thursday is Companies That Care Day, an annual events aimed at supporting the well-being of employee and communities, with a focus this year on childhood literacy.


Friday is the first day of Spring . . . and it's Day One for the National Cherry Blossom Festival in Washington, D.C.


And Saturday sees the ninth anniversary of the very first tweet, by Twitter founder Jack Dorsey. Nothing profound, just: