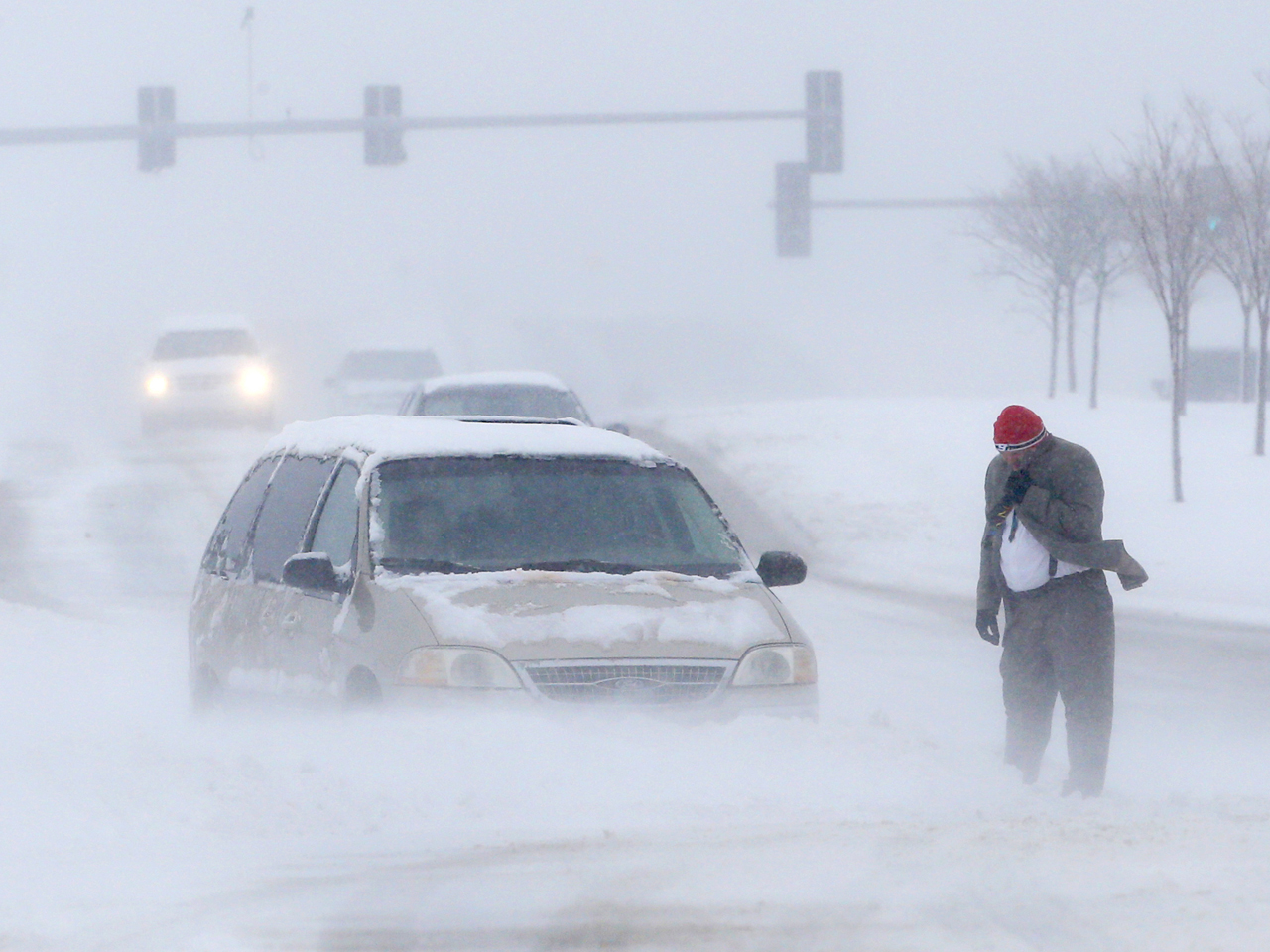 KANSAS CITY, Mo. Few signs of spring are being found in parts of the Midwest as a snowstorm tracks eastward mostly along Interstate 70, bringing heavy snow and high winds.

Two people killed in weather-related crashes were identified, dozens of Palm Sunday services were cancelled throughout Missouri, and about 100 flights were scrapped at Lambert Field in St. Louis. Winter storm warnings and advisories have been issued for Sunday and Monday as far east as Pennsylvania.

The storm dumped 7 to 9 inches of snow from eastern Kansas into central Missouri before tapering off Sunday morning, said Dan Hawblitzel, a meteorologist with the National Weather Service in suburban Kansas City.

In the central Missouri town of Columbia, TV station KOMU was briefly evacuated Sunday morning because of high winds and a heavy buildup of snow on the broadcast tower next to the building. And Missouri Gov. Jay Nixon announced he was cancelling a couple events planned for Monday because of the weather.

But there was no cause for college basketball fans in Kansas City to be concerned, as the snow didn't affect the NCAA men's tournament schedule.

By early Sunday evening, St. Louis had about a foot and northern suburbs from 12 to 14 inches, with another 1 to 2 inches expected, said Jim Sieveking, a meteorologist in St. Louis.

"The snow intensity is pretty heavy, so the visibility is low," said Todd Waelterman, director of the City of St. Louis Streets Department. "So we've asked people to stay off the road and let our plows do their job. And people seem to be heeding that warning."

Some parts of central Illinois already had received 6 to 10 inches by Sunday evening and could receive another 1 to 2 inches, Sieveking said. The storm also was brushing northern Oklahoma and Arkansas.

Snow began falling Sunday afternoon in Indiana, with accumulations of 6 to 10 inches predicted. The system then will move into Ohio on Sunday night, bringing between 5 to 9 inches, Hawblitzel said.

The storm is expected to weaken as it moves into Pennsylvania late Sunday and into Monday, with totals ranging from 3 to 8 inches. Before it exits off the coast of New Jersey on Monday night, the storm could leave 2 to 4 inches in that state as well as Delaware, northern Maryland and southern New York.

To the west, parts of Colorado and northwest Kansas spent Sunday digging out from 10 to 15 inches of snow that were dumped there Saturday. Southwestern Nebraska got up to 7 inches. Winds gusting at speeds of up to 45 mph created snow drifts of 2 to 3 feet in the three states, said Ryan Husted, a meteorologist with the National Weather Service in Goodland, Kan.

"We have pretty much cleared out. Sunny skies. It's starting to melt a little bit," Husted said Sunday. Transportation officials reopened several closed highways, including a stretch of Interstate 70 spanning from Denver to Colby, Kan.

Authorities on Sunday also released the names of two people killed in separate crashes. In northeast Kansas, Anthony J. Hinthorne, 40, of Topeka, was killed Saturday afternoon in a single-vehicle crash and rollover on the Kansas Turnpike as snow was falling in Shawnee County, the Kansas Highway Patrol said. Later that night, Joshua J. French, 24, of Naperville, Ill., was killed when he lost control of his vehicle on a wet stretch of Interstate 35 in eastern Missouri's Clay County.