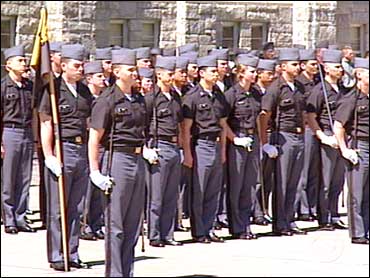 In the last seven months, two cadets, a faculty member and a staff member at the academy have taken their own lives. The suicides were the first at the school in upstate New York since 1999.

They are part of a larger trend as the strained military wages war in Iraq and Afghanistan. The Army had its highest rate of suicide on record in 2008 and is investigating a spike in the number in January.

Academy Chaplain Col. John Cook, who addressed the issue Wednesday at a board meeting on Capitol Hill, said there does not appear to be a common denominator among the four West Point suicides - the most recent of which occurred in January. None of the four had faced a recent deployment, for example.

In addition to the suicides, two cadets recently attempted to take their own lives, he said.

"We're doing everything we can to study these cases, understand why they happened, and see what we can do to move ahead," Cook said.

He said three times the number of cadets are seeking mental health help, which leaders view as a positive sign that the stigma associated with getting assistance has been reduced.

Brig. Gen. Michael Linnington, commandant of cadets, said there is a misconception among cadets that seeking help will jeopardize their military careers, so leaders have aggressively emphasized that's not the case.

Army Secretary Pete Geren, who also attended the meeting, said that's also a challenge Army-wide. He said surveys show the stigma associated with seeking help has decreased, but more than half of soldiers surveyed still believe that getting help could damage their futures.

Cook said the academy has reframed its training on suicide prevention to include it as part of its leadership development curriculum. In small group settings, he said, future military officers discuss preventing suicide as part of being a good leader.

"How are you going to ... make sure your soldiers remain alive so they can continue their service to our nation?" Cook said the cadets discuss.

Linnington said there's an understanding that with each new class, mental health needs to be discussed.

"It's not something we can ever rest on," he said.

The committee "should move immediately to determine whether deficiencies exist in the way potential military personnel are screened, or in the diagnosis or treatment of active duty service members who are suffering from psychological problems," their statement said.