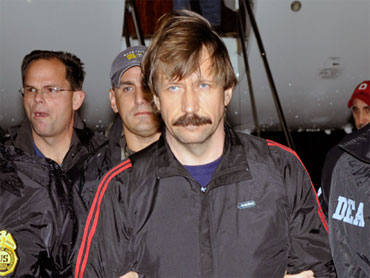 The American ambassador to Thailand warned that country's leader last year that associates of suspected Russian arms merchant Viktor Bout tried to prevent his extradition to the U.S. and were behind bribery schemes and a plot to arrest U.S. officials, according to secret diplomatic memos released Wednesday by WikiLeaks.

In a February 2009 meeting with Thai Prime Minister Abhisit Vejjajiva, Ambassador Eric John told of "serious concerns that Bout's associates had been able to influence testimony" during the suspect's drawn-out hearings on extradition to the U.S.

"Russian supporters have been using money and influence in an attempt to block extradition," John told Abhisit, according to one of the cables. Copies of the cables released by WikiLeaks excised the names of the individuals allegedly receiving bribes.

In a review by the CBS Investigative Unit of the secret diplomatic memos it was also disclosed that John urged steps be taken to rally support to overturn on appeal the lower court's ruling against a Bout extradition and to ensure that Bout remain incarcerated during the appeals process.

"Given that the same judge will rule on any bail motions brought by Bout (we expect Bout's attorneys to push hard on bail) however his custody status during the pendency of the appeal is a genuine concern,'' according to one memo saying his detention must be made clear to the Thai Government.

In another cable, the American ambassador said he would encourage the Thai government "to issue a public statement expressing disappointment in the judge's verdict...and a reiteration of Thailand's commitment to both the struggle against international terrorism and to its extensive law enforcement relationship with the United States."

Bout was jailed in Bangkok in March 2008 after he was arrested in a sting by U.S. narcotic agents on charges of conspiring to sell weapons to a terrorist group. He fought extradition for more than 2½ years until Thai officials ordered him sent to the U.S. last month. Bout was flown to New York to face trial and is being held in a federal detention facility.

U.S. officials at the time of the 2009 cable looked into reports of bribes topping $3 million, according to two American officials familiar with the Bout case. The officials spoke on condition of anonymity because the legal case against Bout is still being developed.

Thai government spokesman Panitan Wattanayagorn, speaking to reporters Thursday in Bangkok, had no comment on the bribery allegations, other than to say the office of Prime Minister Abhisit Vejjajiva "will certainly look into it."

"It's very difficult for us to verify until we have a proper investigation," he said. One of the cables, from August 2009, said a U.S. Justice Department official supplied the names of individuals involved in the bribery scheme to an aide of the prime minister when John met Abhisit.

Bout, 43, gained notoriety as the alleged armorer for African dictators and the Taliban's mullahs. The United States, its allies and the U.N. tried in vain to scuttle his worldwide operation for more than a decade while Bout built a massive fleet of more than 60 cargo planes and amassed a fortune estimated by American investigators at more than $6 billion.

According to the 2009 document, John told the Thai leader during their session that "bribery had infected the Bout proceedings" and warned that false testimony could lead the Thai court to "possibly deny extradition."

The ambassador told Abhisit that U.S. officials had also learned of a scheme to "arrest and embarrass" two federal Drug Enforcement Administration agents assigned to the Bout investigation. According to John, unnamed plotters aimed to have the two agents arrested, apparently by Thai law enforcement, "on meritless charges participating in illegal recordings of Bout on the day of his arrest."

Much of the federal prosecution's case against Bout is expected to be based on extensive wiretaps of Bout's conversations in Bangkok and elsewhere around the world. The DEA also employed several undercover informants to lure him to Thailand. A former Bout associate who was arrested with him in a Bangkok luxury hotel is expected to testify against him.

John also detailed false testimony from several witnesses for Bout who had claimed he went to Bangkok "to conduct official business with the Thai government" in connection with a Russian submarine project.

The cable reported that Abhisit agreed to deal with the "irregularities" in the extradition proceedings through Thai channels and asked for the identities of the bribery plotters. U.S. officials provided the names, the cable reported.

Six months later, Bout was still fighting his extradition and U.S. officials were growing frustrated, according to a second cable released Wednesday. The Aug. 13, 2009, document, also marked "secret," describes an Aug. 11 Thai court decision against extradition as "disappointing" and based on "dubious legal reasoning."

Discussion of a telephone call from Obama to Abhisit "has been under way for some time; they have not spoken in the seven months both have been in office," embassy officials noted in the cable. "We suggest that the call be accelerated and that it include a serious discussion of our concerns over the implications of the Bout verdict, as outlined above. We believe POTUS involvement on Bout would have significant effect here."

Secretary of State Hillary Rodham Clinton later brought up the Bout case with Thai leaders, but Abhisit told reporters Thursday that he had received no such call from Obama.