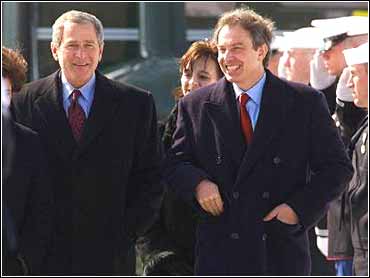 There is no doubt that England and America have a special bond, developed across nearly three centuries of war, negotiation and cooperation.

The relationship was recently put to the test over the wars in Iraq and Afghanistan, and the U.K. emerged as America's staunchest - some say blind - ally.

Now, however, recently released U.S. diplomatic cables claim that the Obama Administration agreed to give Russia the serial numbers for every Trident Missile it gave the U.K. as part its negotiations over the New START treaty.

While the U.S. Department of State officially denies this was part of the final nuclear arsenal reduction agreement with Russia that went into effect Saturday, some Englishmen are saying the revelation leaves them feeling forsaken by President Obama.

The British Daily Telegraph newspaper said that and other revelations from WikiLeaks' leaked U.S. diplomatic cables make the "Special Relationship" between America and England seem like "a one-sided affair."

British Historian Andrew Roberts argues that the mere fact that this was discussed without apparent approval from the British government makes the move a "dangerous betrayal."

"It is bad enough the president arrogating to himself the decision as to who should rule in Egypt, but it is completely unacceptable for him to undermine the whole basis of the British nuclear deterrent, which has always been to keep the Russians guessing about how many warheads the United Kingdom has," Roberts writes on the Daily Beast.

Roberts goes on to accuse President Obama of treating "Britain with a thinly-veiled sneer throughout his presidency."

Roberts writes: "President Obama's knee-jerk Anglophobia--seen when he returned the bust of Churchill to the British Embassy, when he talked of putting "British" Petroleum under his "boot," when he called Sarkozy's France "our closest and best ally," and so on--most probably derives from his misconceptions about the British Empire's record in Kenya, as relayed by his extremely unreliable father. Whatever the reason, his delivery to Moscow of Trident's unique identifier numbers against British opposition represents the lowest point for the Special Relationship since Harold Wilson refused Lyndon Johnson's blandishments to fight in Vietnam in the mid-1960s. The Relationship will survive Obama, of course, but it has been indisputably damaged, and for no good reason."