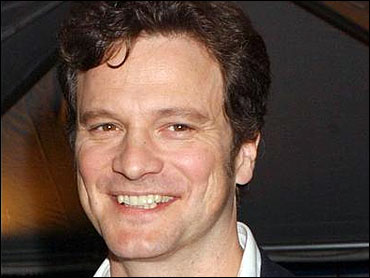 Colin Firth On Board For "Dorian Gray"

Colin Firth has signed on to star opposite Ben Barnes in "Dorian Gray," the retelling of the Oscar Wilde classic being directed by Oliver Parker.

Based on "The Picture of Dorian Gray," the story centers on Gray (Barnes), a young man who becomes the subject of a painting. As the man descends into a hedonistic lifestyle, the portrait begins to age and morph, but he doesn't.

Firth will play Lord Henry Wotton, the aristocrat who corrupts Gray with his worldview. (He is sometimes called Harry in the novel.)

Parker plans to make a visceral, dark horror story and said the themes of stardom are as relevant as ever.

The movie began shooting this week.

A recent ad by the Republican presidential candidate attempts to mock Democratic rival Barack Obama by dismissing him as a mere celebrity. To make the point, the ad uses images of Paris Hilton and Britney Spears.

The McCain campaign says it's an attempt to inject humor into the presidential race.

Hilton's mother was not amused. On the Huffington Post Web site, she calls the ad a "complete waste" of time and campaign money.

And she should know: Kathy Hilton and her husband are McCain campaign donors.

The Screen Actors Guild says back-channel talks are under way with Hollywood studios on a contract to replace the one that expired on June 30.

The guild's executive director, Doug Allen, sent an e-mail message to members on Sunday saying union leaders were involved in informal meetings and exchanges with producers.

However, the Alliance of Motion Picture and Television Producers countered that no meetings on the contract have taken place in three weeks and none were planned.

A meeting was scheduled to deal with outstanding grievance claims, the alliance said.

The studios reiterated their call for the guild to accept their final offer made on June 30.

Actors have kept working during the dispute that includes new-media production and residual issues.

There's a possibility for a Jacksons reunion of sorts. The brothers are set to be honored as BMI Icons at its annual Urban Awards next month.

So far, all the brothers, with the exception of Michael, have confirmed their attendance at the event, to be held Sept. 4 at the Wilshire Theatre in Beverly Hills. An all-star tribute is planned, according to a release issued Monday.

The Jackson Five, which included Michael along with Marlon, Jackie, Tito and Jermaine, were a groundbreaking, best-selling act with classics that include "ABC" and "I Want You Back."

They have been inducted into the Rock and Roll Hall of Fame. The group, with brother Randy replacing Jermaine, became the Jacksons after leaving Motown in 1976. They continued their multiplatinum success with hits including "Heartbreak Hotel" and "Shake Your Body (Down to the Ground)."

Both versions of the group will be honored.

There have been rumblings of a possible Jacksons reunion for years. The last album that featured all of them in some form was in 1989 and they haven't performed together in years.

Harry Potter is still king, but the final book of Stephenie Meyer's "Twilight" series did manage a million-selling debut.

Publisher Little, Brown Books for Young Readers announced Monday that it has gone back for 500,000 more copies, making the total print run 3.7 million.

The numbers for "Breaking Dawn" are comparable to the openings of a pair of famous memoirs: former President Bill Clinton's "My Life" and Sen. Hillary Rodham Clinton's "Living History." But they don't approach the unveiling of "Harry Potter and the Deathly Hallows." The seventh and final volume of J.K. Rowling's fantasy series sold 8.3 million copies in its first 24 hours in the United States alone.