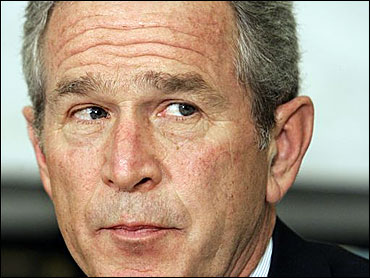 The wait, and guessing game, continue in Washington over whether the special prosecutor investigating the leak of a CIA employee's identity will hand down indictments and if so, who who'll be indicted?

If any administration officials are, reports CBS News Senior White Correspondent Bill Plante, President Bush's response might be different than he was promising it would be when the probe was in its earliest days. Plante says the president's public stand on the investigation has evolved considerably since then.

The probe, Plante explains, began as something the Bush White House thought it could control.

Two years ago, before special prosecutor Patrick Fitzgerald was appointed, the president vowed to fire anyone caught passing classified information.

In Chicago in September 2003, Mr. Bush said, "If somebody did leak classified information, I'd like to know it, and we'll take the appropriate action."

In June 2004, with the prosecutor's investigation under way, the president was still vowing to stop the leaking. Asked if he stood by his pledge to fire anyone found to have leaked classified info, Mr. Bush replied, "Yes. And that's up to the U.S. attorney, to find the facts."

But by this past summer, the president had raised the bar for a firing offense, saying on July 18, "If someone committed a crime, they will no longer work in my administration."

And in recent weeks, as the pressure increased, Mr. Bush has, Plante says, "clammed up."

He wouldn't comment on reports that his allies have begun laying the groundwork to discredit Fitzgerald as overzealous if he does hand down indictments, saying, "This is a very serious investigation. I haven't changed my mind about whether or not I'm going to comment on it publicly."

Meanwhile, Plante points out, other political problems for the president persist.

Conservatives upset by the nomination of Harriet Miers to the Supreme Court tried to turn up the heat with a Web site inviting people to send in anonymous tips about her and urging withdrawal of her nomination.

Mr. Bush wouldn't say if the White House has a contingency plan to pull the nomination, but he did tell senators who want to see more of her white house legal work to forget it.

"They may ask for paperwork about the decision-making process, what her recommendations were, and that would breach very important confidentiality," the president insisted. "And it's a red line I'm not willing to cross."

Adding to Mr. Bush's plate of trouble, the American death toll in Iraq is expected to pass the 2,000 mark anytime now. And that, Plante notes, links directly back to the argument at the heart of the leak investigation: the justification for the war.

It is alleged Valerie Plame's identity was leaked as revenge for her husband's public repudiation of part of the argument for one of the reasons given for going to war, namely, that Iraq was attempting to resuscitate its nuclear program.