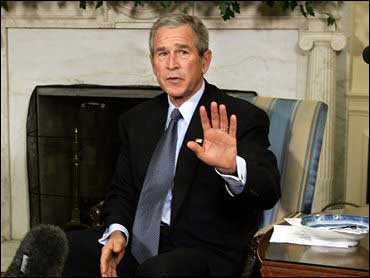 With the CIA leak investigation nearing an end, President Bush on Monday declined to say whether he would remove an aide under indictment.

"There's a serious investigation," the president said. "I'm not going to prejudge the outcome of the investigation." He commented in response to reporters' questions during a meeting with Bulgaria's president, Georgi Parvanov.

Two top White House aides, Karl Rove and I. Lewis Libby, have been questioned by a grand jury about their conversations with reporters about CIA operative Valerie Plame. The identities of those who disclosed Plame's name are vital pieces of evidence for prosecutor Patrick Fitzgerald as he tries to track down leakers in the Bush administration.

New York Times reporter Judith Miller says she told a federal grand jury she could not recall where she heard name of the covert CIA officer whose cover was blown, even though she jotted it down in her notebook.

"I told Mr. Fitzgerald, I simply could not recall where that came from, when I wrote it or why the name was misspelled," Miller said in a first-person account for her newspaper published Sunday.

Fitzgerald has been gathering evidence on conversations between Libby, vice presidential chief of staff, and Miller.

Miller spent 85 days in jail for refusing to disclose her source for Plame's identity but has since made two recent grand jury appearances about her discussions with Libby concerning Bush administration critic Joseph Wilson, Plame's husband.

"I testified that I did not believe the name came from Mr. Libby, in part because the notation does not appear in the same part of my notebook as the interview notes from him," Miller wrote in the Times. "Mr. Fitzgerald asked if I could recall discussing the Wilson-Plame connection with other sources. I said I had, though I could not recall any by name or when those conversations occurred."

Miller also wrote down Plame's name in her notes as "Victoria Wilson."

"I told Mr. Fitzgerald that I was not sure whether Mr. Libby had used this name or whether I just made a mistake in writing it on my own," Miller recalled. "Another possibility, I said, is that I gave Mr. Libby the wrong name on purpose to see whether he would correct me and confirm her identity.

"I also told the grand jury I thought it was odd that I had written `Wilson' because my memory is that I had heard her referred to only as Plame. Mr. Fitzgerald asked whether this suggested that Mr. Libby had given me the name Wilson. I told him I didn't know and didn't want to guess."

The Iran-Contra controversy featured a White House military aide, Oliver North, who testified that he was unable to recall key events about the arms-for-hostages deals with Iran and the covert arming of guerrilla forces fighting the leftist government of Nicaragua.

Miller is in a different position than her predecessors in Washington controversy. She is a witness in the investigation, not under scrutiny herself.

Rove gave grand jury testimony Friday — his fourth appearance. He was warned ahead of time by Fitzgerald, that there is no guarantee he would escape indictment.

Rove did not initially tell investigators that he had a conversation with Time magazine reporter Matt Cooper about Wilson and his wife's status as a CIA officer.

"There's no question that, when you don't reveal something that appears to be material to an investigator initially, it raises questions in a prosecutor's mind and perhaps a grand juror's mind," said Joseph diGenova, a U.S. attorney in the Reagan administration.

"But it's also true, for those of us who have had witnesses as government attorneys and as defense attorneys, that people do forget things," he told ABC.