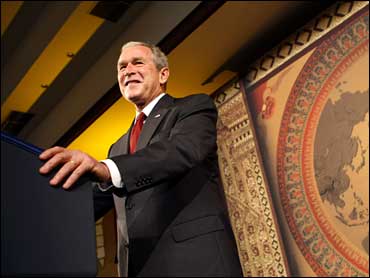 With all eyes on Beijing, President Bush bluntly told China that America is strongly opposed to the way the communist government represses its people, a rebuke delivered from the heart of Asia on the cusp of the Olympic Games.

In perhaps his last major address in Asia, Mr. Bush said that America speaks out for a free press, free assembly and labor rights not to antagonize China's leaders, but because it's the only path the potent U.S. rival can take to reach its full potential.

"We press for openness and justice not to impose our beliefs, but to allow the Chinese people to express theirs."

The Chinese government responded quickly, saying "outsiders should not interfere in its affairs," ratcheting up the political tension on the eve of the Games' opening ceremonies, reports CBS chief White House correspondent Jim Axelrod.

Foreign Ministry spokesman Qin Gang said China and the United States have divergent views on human rights and religions issues, but said Beijing firmly opposed "any words or acts" that used those issues to interfere in other countries' internal affairs.

Along with his chiding, Mr. Bush offered praise for China's market reforms and hope that it will embrace freedom, reflecting the delicate balance that the president seeks to strike with the potent U.S. rival.

"Change in China will arrive on its own terms and in keeping with its own history and its own traditions. Yet change will arrive," he said.

Mr. Bush delivered his message in Thailand hours before departing for his Olympics-centered visit to Beijing. He arrived in China Thursday evening, becoming the first U.S. president to attend Olympic Games on foreign soil.

Mr. Bush plans to attend the opening ceremony of the Olympics on Friday night and go to a series of sporting events through Monday, including U.S. basketball and baseball games against China.

International studies professor Zhu Feng, of Peking University, told CBS News correspondent Jeff Glor that Mr. Bush's remarks were firm, but measured. "I have to say he is very careful in his wording and the word selection."

Heading eagerly on Thursday to the Beijing Olympics himself as a sports fan, Bush faced pressures all around: a desire not to embarrass China in its moment of glory, a call for strong words by those dismayed by China's repression, and a determination to remind the world that he has been pushing China to allow greater freedom during his presidency.

But his message was noted in China, which has already knocked Mr. Bush for intruding in its affairs by hosting Chinese dissidents at the White House ahead of the games.

"The leadership in Beijing will almost certainly find his comments irritating or objectionable," said Sophie Richardson, the Asia advocacy director for Human Rights Watch. "But they will clearly understand that the United States will not impose any real consequences if they do not make progress on human rights."

For months Bush has taken heat from critics over his decision not to boycott the opening ceremonies in Beijing, reports Axelrod. Aides have maintained that attending the ceremonies would give Mr. Bush the moral authority to speak clearly to Chinese leaders.

Bush and China's president Hu Jintao should have plenty of chances to discuss the issue, reports Axelrod. Their paths will cross at least three times in the next four days.

Meanwhile, as a sign of heightened anxiety and security on the part of the Chinese, and perhaps even some pettiness, the plane carrying White House staff and reporters landed and was then held on the ground for three hours while the plane's luggage was checked and searched - a departure from normal diplomatic protocol, reports Axelrod.

CBS News was also told that even Bush's luggage off Air Force One was held up for a couple of hours before being allowed to leave the airport and be delivered, though it was not searched.

Seeking an event scrubbed free of protest, China has rounded up opponents and slapped restrictions on journalists, betraying promises made when China landed the hosting rights.

At least two women who have protested being evicted from their homes ahead of the Olympics were rounded up and taken to a police station, amid ramped up efforts Thursday by activists to use the games to spotlight their causes.

Zhang Wei and Ma Xiulan, who have been vocal about the pain of losing their family compounds near Tiananmen Square to make way for Olympic construction, were taken from their homes late Wednesday and early Thursday morning, according to Ma.

Also Thursday, a second protest by three Americans in Tiananmen Square was stopped by security agents, including at least one plainclothes police officer, who blocked the group from view with umbrellas before grabbing their arms and leading them away.

Another group of foreigners, pro-Tibet activists, were detained Wednesday after climbing up lamp poles outside the Beijing National Stadium, also known as the Bird's Nest, and putting up banners proclaiming "Free Tibet."

Two of the four detained activists from Students for a Free Tibet - both of them British - were deported to Frankfurt, Germany, group spokesman Matt Whitticase said Thursday.

The other two, Americans Phill Bartell from Denver, Colo., and Tirian Mink from Portland, Ore., were also deported and en route to San Francisco on Thursday.

Meanwhile, U.S. Olympic gold medal speed skater Joey Cheek had his invitation to the Beijing Games torn up at the last minute, presumably for his outspoken stance as founder of "Team Darfur," a group of athletes that raises awareness of the plight of refugees in Sudan.

"Less than 24 hours before my flight was to take off, I got a call," Cheek told CBS News Early Show co-anchor Harry Smith. "When I asked for a reason for revoking my visa, they said they weren't required to give one. So I really couldn't tell you why."

"We've at times been critical of the Chinese government's involvement in Sudan, and I think rightfully so. We have been adamant from the very beginning that every athlete has to follow the absolute letter of the law for the IOC rules and Chinese laws. I've never advocated any sort of radical extreme views. We think athletes should have the right to be able to talk about issues around the world."

Chinese who demonstrate would face detention and hours of questioning by police, at the very least.

The arrests and detentions were part of stringent security measures for the games by Chinese communist authorities determined that the Olympics should be an international showcase for the country.

With the world's eyes turned on Beijing in anticipation of the games, which start Friday, activists have stepped up their protests to publicize their causes. The groups so far have been small and police have acted with relative restraint. No arrests were reported although the Beijing Olympics organizing committee condemned the demonstrations.