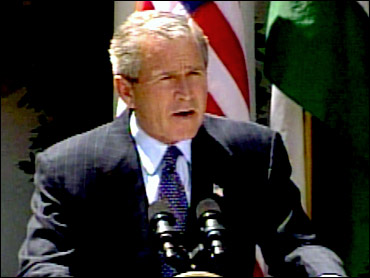 President Bush has apologized for the first time for the abuse and humiliation of Iraqi prisoners by U.S. soldiers, saying Thursday that the scenes of mistreatment had made Americans "sick to our stomachs."

"I told him I was as equally sorry that people seeing those pictures didn't understand the true nature and heart of America," Mr. Bush said, standing in the Rose Garden alongside Abdullah.

"It's a stain on our country's honor and our country's reputation," Mr. Bush said. "I am sickened by what I saw and sickened that people got the wrong impression."

Mr. Bush also rejected calls for the resignation of Defense Secretary Donald Rumsfeld, saying, "He's an important part of my Cabinet and he'll stay in my Cabinet."

The president's statement went beyond his comment Wednesday that the abuse of prisoners was "abhorrent" and "does not represent the America that I know."

His lack of an apology Wednesday was striking, and his spokesman said later that the president was sorry. Mr. Bush gave voice to that sentiment Thursday.

Scenes of mistreatment have been broadcast around the world, drawing international condemnation and prompting outrage in the Middle East. Mr. Bush said he discussed the pictures with Abdullah.

Mr. Bush said he told the king: "Americans like me didn't appreciate what we saw, and it makes us sick to our stomachs.

"I also made it clear to his majesty that the troops we have in Iraq who were there for security and peace and freedom are the finest of the fine."

For his part, the king said, "We're all horrified by the images of torture and abuse."

He said he was confident that American investigations would find the guilty parties. The abuse by some soldiers "doesn't reflect the morals and values" of the United States, Abdullah said.

Describing a meeting he had with Rumsfeld on Wednesday, Mr. Bush said, "I told him I should have known about the pictures and the report" done by the Pentagon two months ago.

Members of Congress are also angry at Rumsfeld for not alerting them to the pictures. Sen. John McCain, R-Ariz., said Rumsfeld did not mention the impending abuse story when he briefed them on Capitol Hill the day of the broadcast.

"I think that's what's sparked a lot of outrage here," McCain told the CBS News Early Show. "And I think there's going to be repercussions about that, because we do have a responsibility here in Congress."

Democratic presidential candidate Sen. John Kerry, who called for Rumsfeld's resignation months ago over his handling of the Iraq war, said the abuse reports compound the reasons for him to quit.

Rumsfeld was to testify before the Senate Armed Services Committee on Friday.

In a Thursday editorial, the St. Louis Post-Dispatch called for Rumsfeld to resign over the "botched handling" of the investigation. A column in The New York Times by Thomas L. Friedman called on Mr. Bush to fire Rumsfeld "today, not tomorrow or next month."

Two Bush advisers, speaking on condition of anonymity, said Thursday that Bush stood firmly behind Rumsfeld despite what one called a "mild rebuke." They said it was important that the Arab world and the American people know that Mr. Bush was unhappy with the way he was informed of the prisoner abuse, suggesting that leaking word of the rebuke was a political and diplomatic maneuver rather than a signal that Rumsfeld's job is in trouble.

Rumsfeld himself has deflected questions about whether he should resign. But as the defense secretary prepared for Friday's congressional hearing on the prison abuses, the chorus of criticism gathered strength.

In an interview with CNN, Secretary of State Colin Powell said he was "shocked" by the allegations of abuse. He referred to the My Lai massacre.

"In war, these sorts of horrible things happen every now and again, but they are still to be deplored," Powell said. "And what happened in this particular instance, as best I know from the pictures, was just totally despicable."

The international Red Cross said it had repeatedly asked U.S. authorities to take action over prisoner abuse and that American officials reacted positively before recent revelations about the way detainees were treated.

The Washington Post, in its Thursday editions, said it had obtained a new batch of more than 1,000 digital photos from Iraq. One depicted what appeared to be a female soldier holding a leash that goes around a naked man's neck at Abu Ghraib prison.