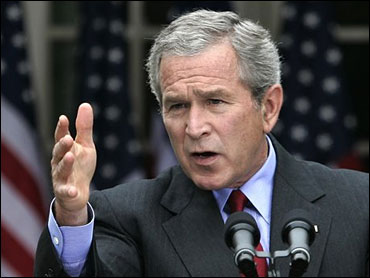 A day after his surprise trip to Baghdad, President Bush said, "I sense something different happening in Iraq." He predicted that from now on "progress would be steady."

Mr. Bush told a White House news conference Wednesday morning he was "inspired" by his whirlwind visit to "a free and Democratic Iraq," but he acknowledged that violence there would never be completely eliminated.

"That's not going to happen," he said.

Mr. Bush said that Iraqi and coalition forces were stepping up their activities against insurgents, in part by using new intelligence gathered in raids following the killing of top Iraqi terrorist Abu Musab al-Zarqawi last week.

"Iraqi and coalition forces are still on the offense," Mr. Bush added. He cited raids of suspected terrorist targets. "We got new intelligence from those raids which will enable us to keep the pressure on the foreigners and the local Iraqis who are killing innocent lives," he said.

But he said an expectation of "zero violence" was unreasonable. "Obviously we would like violence to go down," Mr. Bush said.

He said that a security crackdown ordered by Iraqi Prime Minister Nouri al-Maliki that began on Wednesday, which includes more police and more checkpoints, was intended to decrease violence.

With al-Maliki's new unity government in place, "The progress will be steady toward a goal that has clearly been defined," Mr. Bush said.

CBS News chief White House correspondent Jim Axelrod reports the president seemed energized from his quick trip to Iraq and what he calls "a moment of opportunity" there.

He arrived back at the White House at 3:30 Wednesday morning, and about six hours later he was standing in the Rose Garden.

CBS News senior White House correspondent Bill Plante reports the president also offered a preview of the argument Republicans will make in the fall election campaigns: a pullout or a date certain for withdrawal, as advocated by some Democrats, would endanger the country.

Mr. Bush said he recognized that calls for bringing home many of the 130,000 U.S. troops now in Iraq would only increase as the November elections draw nearer, but pulling out too soon would "make the world a more dangerous place. It's bad policy."

Mr. Bush pledged that the U.S. will remain in Iraq until the Iraqis can take care of themselves.

"My message to the enemy is, don't count on us leaving before we succeed."

He predicted Republicans will "hold the House and the Senate because our philosophy is one that is forward-looking and optimistic and has worked."

On another subject, Mr. Bush was asked about three suicides last week among terror suspects being held at the U.S. prison camp at Guantanamo Bay, Cuba.

"I'd like to close Guantanamo. I also recognize that we're holding some people that are darn dangerous," he said. "Eventually, these people will have trials and they will have counsel."

Human rights organizations and many foreign leaders have urged the United States to shut down the prison.

"I trust Karl Rove and he's an integral part of my team," he said.

Of his meeting with al-Maliki, Mr. Bush said, "I saw firsthand the strength of his character and his deep determination to succeed."

"I was inspired to be able to visit the capital of a free and Democratic Iraq," Mr. Bush said of his unannounced visit to Iraq on Tuesday, in which he spent just over 5 ½ hours in the capital.

Mr. Bush defended the extremely tight security surrounding his lightning trip to Baghdad. Only a few top aides knew about the trip ahead of time – not even most members of his Cabinet.

Even al-Maliki was only told five minutes before they met. Mr. Bush said that short-notice didn't reflect any lack of trust in the prime minister.

"It's a security concern because I'm a high value target for some," Mr. Bush said. "Iraq's a dangerous place."

Mr. Bush declined to draw any parallels between the U.S. presence in Iraq and its involvement three decades ago in Vietnam.

"I did the right thing in Iraq," he said.