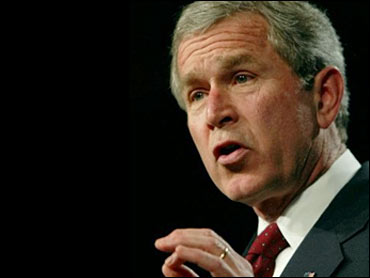 President Bush asked religious broadcasters Monday to rally people in need in the United States and help "change America, one heart and one soul at a time."

"We must apply the great compassion of our people to the deepest problems of our country," Mr. Bush told religious broadcasters. "Government cannot put hope in people's lives."

The president came to Nashville's Gaylord Opryland hotel to urge his audience to help him achieve programs that that reach out to people in need.

"I believe governnment should welcome faith-based groups as allies in the great work of renewing America," he said.

Mr. Bush said he understands government should not back a specific religious view, but said that it should work to "provide effective social services that go to anyone in need, regardless of their faith."

Those organizations should not be forced "to change or compromise their prophetic role," he said.

Mr. Bush is stepping up efforts to get religious groups involved in the delivery of social services while pushing new initiatives for mentoring children and helping drug addicts.

On Sunday, the president urged Republicans in Congress to work with him on several areas he considers key components in his vision of "compassionate conservatism."

Mr. Bush outlined plans to push for programs that would help these people.

"I'm going to call for focus on those who are addicted to drugs," he told the lawmakers. "We'll work hard to continue to drive the demand for drugs down and interdict supply, but there are sad souls in our society who are hooked on drugs."

He said it was important to pursue such programs domestically, but also "to show our compassion abroad as well."

The president also talked about the thousands of children living in orphanages in Africa because their parents died of AIDS, and he asked Congress to approve quickly his proposal to sharply increase U.S. aid to the global battle against the disease — to $15 billion over the next five years.

Democrats have questioned how Mr. Bush can push for programs to help the needy, improve education and provide prescription drugs at the same time he is pushing tax cuts repeatedly and planning for a war with Iraq.