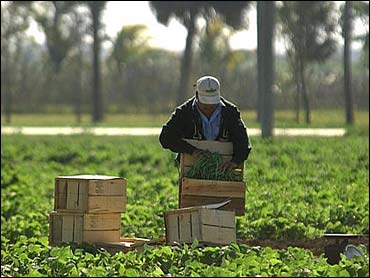 An executive order released Tuesday involved the departments of agriculture, health and human services and homeland security, as well as the Environmental Protection Agency, in the response to potentially calamitous agricultural terrorism.

"It's from farm to fork," said Jeremy Stump, the U.S. Department of Agriculture's director of homeland security. "It's a protective shield around the whole sector."

The directive calls for creation of systems to contain any outbreaks of plant or animal disease that result from terror attack, and to prevent or cure the diseases themselves.

"We should provide the best protection possible against a successful attack on the United States agriculture and food system, which could have catastrophic health and economic effects," Bush said in the executive order signed last Friday.

No one event, such as the discovery in December of the United States' only known case of mad cow disease, prompted the initiative, White House spokeswoman Claire Buchan said. The order is part of a process to protect agriculture and food, an economic sector that the government labeled in February 2003 as critical infrastructure, she said.

The plan calls on the Agriculture Department to develop a National Veterinary Stockpile that would hold enough animal pharmaceuticals "to appropriately respond to the most damaging animal diseases" within 24 hours of an outbreak. This would include such diseases as foot and mouth, which can spread rapidly and make herds unsalable, and anthrax, which can kill people as well as animals, Stump said.

Mad cow disease probably would not be listed under the program because its long incubation time makes it a poor tool for terrorism, Stump said.

The Agriculture Department is working on a national animal identification system that could track infected livestock. The animal ID system set to be phased in for livestock starting in July 2005 would require 48 hours to locate cattle and other animals. Stump said drugs could be made ready at various locations in 24 hours and given to animals once the ID system tells authorities where the animals are.

The executive order says USDA also must create a National Plant Disease Recovery System that could respond within a single growing season to "a high-consequence plant disease" with pest control measures or disease-resistant seed. The paper gave as examples soybean rust and wheat smut. Both are fast-spreading fungal diseases that can devastate crops, and neither is a major threat in the United States.

Under the new plan, the three departments and EPA, working with the CIA and other government organizations, would look for weak spots in the agriculture and food sectors and develop ways to repair them. This would include heightened screening of foods entering the United States. The government already has enlisted customs officials in the Homeland Security Department to help the Food and Drug Administration inspect shipments.

The plan also tells Agriculture Secretary Ann Veneman to develop a plan within 120 days to encourage "self-protection for agriculture and food enterprises vulnerable to losses due to terrorism."

Industry officials said their organizations were willing to help.

"We take our responsibility of pointing out vulnerabilities very seriously," said Bryan Dierlam, director of legislative affairs for the National Cattlemen's Beef Association.

"If there's a threat to our food supply and our way of life on the farm, then farmers definitely would be in favor of taking some measures to protect it," said Mark Gage, president of the National Association of Wheat Growers.

If there is a terror event, the Homeland Security Department would be in overall charge of the agricultural response, Stump said.

The directive also lets Homeland Security take charge of a peacetime outbreak of a major disease that threatens widespread risk to human health or the economy, Stump said. The new plan could allow a faster and more coordinated response, he said.

Responsibility for food safety is scattered among many agencies, and the initiative "crosses over agencies" so the response to both terror and to non-terror disasters would be comprehensive, Buchan said. Cabinet secretaries still would be responsible for their sections of the overall plans, she said.

The initiative could be financed out of $560 million proposed in the administration's fiscal 2005 budget for agriculture and food defense, Buchan said.