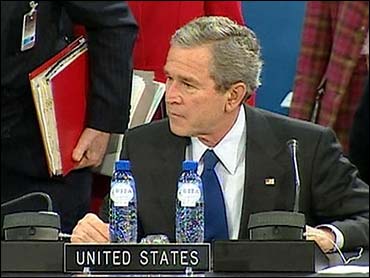 President Bush said Tuesday that it is "simply ridiculous" to assume that the United States has plans to attack Iran over its alleged nuclear weapons program after discussing the issue with European allies.

"This notion that the United States is getting ready to attack Iran is simply ridiculous. Having said that, all options are on the table," Mr. Bush said.

The assurance to Iran's leaders was Mr. Bush's bluntest assessment yet. Last week, he used a series of pre-trip interviews with European journalists to minimize talk of any military attack by the United States.

Mr. Bush has walked a careful line between supporting an approach led by European nations to persuade Iran to scrap its uranium enrichment program in exchange for technological, financial and political support without talking about the U.S. reservations about that strategy.

"It's in our interests for them not to have a nuclear weapon," Mr. Bush said in a news conference with European Union leaders.

The United States has refused to get involved in the bargaining with Tehran or to make commitments toward incentives, insisting that Tehran abandon its program.

The possibility of a military strike has been raised since the U.S.-led war with Iraq over its alleged weapons of mass destruction, which never were found.

He said the fact that all 26 members of the alliance were offering support to Iraq sent a "strong statement" – even though some members will limit their contribution to funding for the mission.

At a news conference at NATO headquarters, Mr. Bush also reiterated U.S. opposition to Europe's plans to lift its 15-year arms embargo against China. Mr. Bush said the United States fears that lifting the ban could change the balance of power in the region, especially between China and Taiwan.

"They say they can develop a protocol that wouldn't concern the United States," Mr. Bush said, adding he was willing to listen during a meeting Tuesday with European leaders.

In Beijing on Tuesday, Chinese Foreign Ministry spokesman Kong Quan said that abolishing the "erroneous and outdated measure" would help move forward China-EU relations. "We hope the U.S. side will follow the trend set by China-Europe relations instead of setting any obstacles to this process," he said.

Mr. Bush also made clear his intention to challenge Russian President Vladimir Putin on recent actions, including restrictions on the press and Moscow's treatment of neighboring Baltic countries, that U.S. officials view as harmful to democracy there. The two leaders meet Thursday in Slovakia.

"A constructive relationship allows me to remind him that I believe Russia is a European country and European countries embrace those very same values that America embraces," Mr. Bush said. "I'm confident that can be done in a cordial way."

As Mr. Bush shuttled in between NATO headquarters and meeting with European Union leaders, opposition to the U.S. president was evident in the streets of Brussels as protesters lobbed a fire bomb at riot police. Police responded with water cannons to disperse the crowd that they estimated was 1,000 strong.

Police said they did not know if anyone was injured. Associated Press Television News reporters saw several people arrested.

NATO, meanwhile, succeeded after struggling for months to get a commitment from all allies to join the mission in Iraq, including those that vigorously opposed the U.S.-led war there.

The development of a reliable Iraqi security force, so that Iraqis can handle their own security, is considered vital to lowering the U.S. troop presence there. Army Lt. Gen. David Petraeus, the general in charge of training Iraqi troops, has said that about 136,000 Iraqis have been trained and equipped — fewer than half the ultimate goal of a force of about 270,000.

The mission inside Iraq is modest. It comprises just over 100 instructors training senior Iraqi officers in Baghdad's heavily protected "Green Zone." More than half the NATO instructors are American.

Alliance planners hope to expand that operation to 160 instructors. In September, they hope for NATO to help run a military academy outside the Iraqi capital — if it can find the troops and money needed.

Mr. Bush said the assistance is more than a mere gesture designed to symbolize the end to bitter divisions wrought by the war. "Twenty-six nations sat around the table saying, you know, 'Let's get the past behind us and now let's focus on helping this — the world's newest democracy — succeed,'" he said.

However, in a sign of lingering differences, France, Germany and other opponents of the war will not send instructors to Iraq, limiting their contribution to training outside the country or funding for the operation.