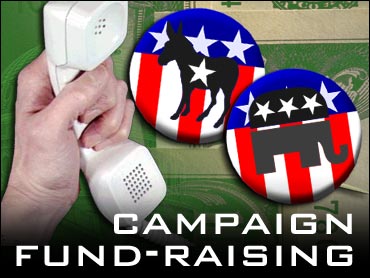 President Bush is asking more than a million potential donors to give money now for his 2004 re-election bid so he can focus on fighting terrorism and running the country.

"I'll be depending on friends and supporters like you to get my campaign organized and operating across our country," Mr. Bush wrote in a letter dated May 16, the day he began his re-election campaign.

"We have no more urgent and important duty than to wage and win the War on Terrorism," he said. "We must make use of the moment history has given us to extend liberty to others around the world, because in the long term, freedom and hope are the best weapons against terror."

The letter was mailed to more than 1 million people, and was sent to others by e-mail. It is part of a far-reaching effort aimed at collecting as much cash as early in the race as possible.

President Bush has no Republican challenger and earned a 66 percent job approval rating in a recent CNN-USA Today-Gallup poll. Still, he told prospective donors, he is taking nothing for granted.

"It will be months before Democrats settle on a candidate, but the election could be close," Mr. Bush wrote. "The strength of our grass-roots effort will determine the outcome. I need help from friends now."

President Bush is widely expected to raise more than $200 million for the primary season, although the White House has said only that he will exceed the record $100 million he raised for the 2000 primaries.

President Bush's national finance chairman, Mercer Reynolds, sent the pioneers a letter Monday urging them to participate again. He noted their job would be easier this time because of the new campaign finance law's increase in allowable individual contributions.

Pioneers will get a special event with the president, and rangers will get "additional special recognition and programs," he wrote.

"Our goal is to host a special event with the president for all pioneers who reach at least the 50 percent mark by June 30," Reynolds wrote. "Your quick response and immediate effort are important. I've also included a list of your 2000 donors for follow-up."

Sig Rogich of Las Vegas, a pioneer in 2000, said he probably already has donor commitments for the $200,000 he needs to become a ranger. Rogich said all he needs to do is contact them and say the campaign is ready to take contributions.

"I've talked about it since the day he was elected: `You know, we're going to be back,"' said Rogich, of Rogich Communications Group. "And I think everyone's been very responsive and positive about it. But we've never really stopped (fund raising), working within the framework of the law."

In addition to his volunteers' efforts, President Bush will headline several $2,000-a-ticket events next month.

Those include an event June 17 in Washington; June 20 in Greensboro, Ga.; June 23 in New York; June 27 in suburban San Francisco and Los Angeles; and on June 30, a luncheon in Miami and an evening event in Tampa, Fla.

The two California events alone are expected to draw about $6 million; that is close to what the top two early Democratic fund-raisers, Sens. John Edwards and John Kerry, each took in from January through March, the most recent figures available.

Vice President Dick Cheney is to hold a June 23 fund-raiser near Boston.

President Bush also is raising money over the Internet. In its first week up, his Web site took in about $25,252 from 118 donors, averaging $214 per donation, Republican National Committee spokesman Jim Dyke said.

The campaign has not yet sent solicitations encouraging people to go to the site, Dyke said.